I was born from love

First off, even this guy that has not one iota of interest in football can recognize an exciting football game when he (doesn't) see one. What a thrill last night's Super Bowl must have been to football fans!

Second, this is the upmteenth morning in a row that the first cup of coffee has been heaven on Earth, a slice of nirvana and the second cup makes me want to throw up. You'd think I would have learned by now.

But that's not what I'm really wanting to write about this morning. As my wife will tell you, I am the most suggestible person on the planet. I will try almost anything once and usually need just a slight nudge to act on something. Nowhere is this more true than it is with the music I listen to. All Heidi has to do is mention a song in passing and I'm all "Oh, I HAVE to go listen to that!!" Such is the case this week. My five albums post has gotten me all into those records, and specifically the song "Stoney End."

I cannot shake the feeling that "Stoney End" started out as "Stoner End" and was changed due to record company pressure, but I digress. It's one of those songs that's been on my radar for nearly 17 years and I still really don't know what it's about. I've had my ideas in the past, and true to form, I've molded the lyrics to fit my life situations (as I have done to all my favorite songs when the situation warranted.) The first version of "Stoney End" that I ever heard was Barbra Streisand's version, so that is the definitive version in my mind. The album Stoney End has a couple other Laura Nyro covers as well - "Hands Off the Man (Flim Flam Man)" and "Time & Love" - but for me, "Stoney End" the song is where it's at. She belts it out like she hadn't just spent the last decade doing supper club numbers and show tunes. And funny enough, it really works. 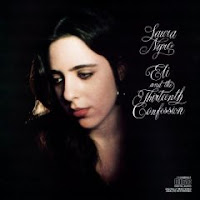 "Stoney End." Had I not heard Streisand's version of it prior to hearing Laura Nyro's version, the original would be the definitive, but without Babs, I may never have heard it. It truly is good, but Laura does not have Babs' pipes. However, she does have a funky harmonica at the beginning and truthfully, her vocal delivery is much more authentic than Streisand's. Discovering her version of "Stoney End" caused me to start digging into Laura Nyro's catalog. I found that I really was familiar with a lot of her songs, thanks mostly to other acts having covered her songs. The Fifth Dimension performed a large number of her songs (and turned most of them into hits) as did Blood, Sweat & Tears and Three Dog Night, albeit to a lesser degree than the 5th Dimension. I grabbed most of those familiar songs and one classic album of hers. Eli & The Thirteenth Confession, as I've written before, is an album that I really need to own on vinyl. Listening to it in crystal clear CD (or mp3 as the case may be) seems to be defeating the purpose. This is a classic album of the 60s and deserves to be listened to in that way! And she is so classically beautiful on that album cover!

I figured that there were no other versions of "Stoney End" out there. How naive could I possibly be!? Over the weekend, a buddy of mine pointed me in the direction of Maynard Ferguson's version of "Stoney End" in response to my 5 albums post. I was eager to hear it, and I was not disappointed! It is a great version of this song. Even without the words, it still works. This got me to thinking this morning, how many other versions of "Stoney End" are there? Well, a quick search of iTunes and allmusic provided the answer. There are not many more, but there are a few. I just HAD to download Diana Ross' take on it and I'm not surprised to say that it does not even come close to touching the three versions previously mentioned. There is also a version by Beth Nielsen Chapman (not on iTunes) which I would love to hear. Beyond that, there are some other covers by lesser known acts.

Wow, who knew I had this much to say about "Stoney End"? I told you I was suggestible. If you've read this far, bless you. I'm not sure I would have.

Oh, and DirecTV is coming to our house today. If the universe collapses upon itself between the hours of 12PM and 4PM CST, you can blame us.

In researching this post, I found out that on the Target version of Streisand: Live In Concert, a live version of "Stoney End" was the bonus track! Curses! FWIW, you can listen to it on YouTube.

*files away for future reference*