A man's nerdery is his castle, or something like that anyway. For all the pop culture things in the room, the anchor of the room is my desk. There's no doubt about it. So no Nerdery Week would be complete without a look at the desktop (and the desktop on the desktop, of course.)

OK, you're reaching my inner sanctum at this point. 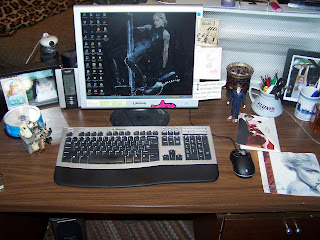 This is the spot from which I do 98% of my blogging, surfing and music listening. I'm not sure that anyone else on the planet has a desk just like this one. And for that, we should all be thankful.

One's choice in desktop wallpaper says a lot about a person. Mine is, naturally, Madge gyrating on the mechanical horse during "Like A Virgin" at the Confessions Tour. This is one of my favorite wallpapers to use because it is such a fantastic shot from the tour and I always love it when she dusts off the moldy oldie hits for another go-round.

Some of the things you see here are permanent items. For example, the three items taped to the side of my monitor have been there for quite a while. The top item is one of my favorite zombie cartoons that I clipped from the Toons (an independent Ames publication featuring cartoons, mostly of the political variety) a few years back. The second is a love note from my daughter. The bottom is a quote by which I attempt to live each and every day (presented to me by my lovely wife.) 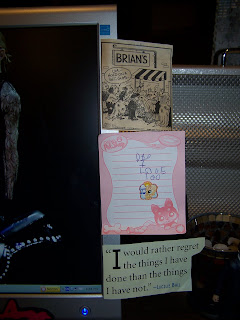 Additionally, there is also an action figure of David Tennant as the Tenth Doctor from the long running British series Doctor Who. Heidi bought this for me when she was in London this last summer. If I have a mancrush, it is probably on David Tennant. He is so damn nerdy cool! 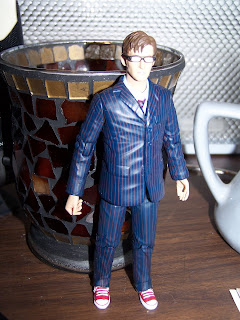 Other things on the desk that you can spot are various pictures of Anna, a cup from a drug company that I've been carting around for years (Floxin - the caffeine compatible quinolone!) But one thing that's hanging out on my desk right now that is decidedly in transit is that Madonna single. It is limited edition blue vinyl pressing of "True Blue" and I've blogged it before, but I am still thinking of having it framed so that I can hang it up on the wall. It's truly one of the few Madonna collectibles I have (more of those coming later in the week.) 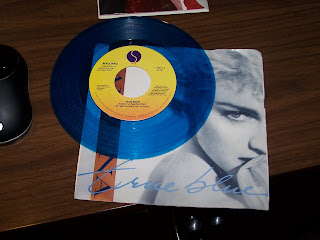 It will probably be framed sometime in 2038. For now, it's on my desk.

Okay, the pics of my desk are posted. I'm completely wishing right now that I had a Ten action figure right now. :)

That note from your daughter is the coolest thing ever, man.

I'm with Thomas... that note is beyond-words cute and so very cool; not nerdy at all. :)

The second coolest thing though, is that desktop wallpaper. Quality. For about 7 months I had a picture of Madge from Confessions playing the guitar during I Love New York. I adore her dabblings with being a Rock God.