There's been a load of compromisin'

I would like to say that I have been wildly productive today, but the sad truth is that I have not been. I mostly have been a layabout with nothing better to do than play random songs in iTunes and search for obscure 70s Cher video on You Tube. I have been successful in the latter quest, finding some real doozies, mostly from her mid-70s variety show. There were musical numbers with the Jacksons, the Osmonds (singing a Stevie Wonder medley of all things!) and Elton John. Seriously, why is The Cher Show not on DVD? OK, it's probably due to music copyright and low demand, but I'd buy it!

But it was this one that really made me smile. Especially starting at about the 2:28 mark.

Glen Campbell and Cher! Wow. Didn't even know that existed. The only reason that Glen Campbell is even on my radar at all is because my mother is so incredibly fond of telling the story of how, as a child, I could not get enough of the song "Rhinestone Cowboy." My mom had the 45 of it (she had a ton of singles) and she's right, I did listen to it endlessly. She tells of how I would put the headphones on my ears (the big 70s kind, none of those iPod earbuds thankyouverymuch), spin "Rhinestone Cowboy" and dance around the living room, tethered to the stereo by the curly headphone cord. There's a picture of it somewhere. It's probably even been scanned but I don't have it on my computer. My father undoubtedly has it on his as he's scanned almost all of our family pictures.

It's probably one of the first examples in my life of how a song could hook me and pretty much hold me hostage. It has happened countless times since then. Music like that is very comforting to me, taking me back to a time when things at least seemed simpler. In many ways, I hope that I am providing that kind of environment for my own daughter. Not that she has to, at some point 30 years from now, write a blog entry about how dancing around to a Cher song or falling asleep to Kate Bush every night was crucial to her development, but I often wonder if home feels as safe to her as it did for me. Certainly, her life is very different from mine, the biggest difference being that she's the only kid.

In any event, here's "Rhinestone Cowboy." (Grab it while you can, limited time only.) And when you listen to it, just imagine this little guy in headphones dancing around the living room. 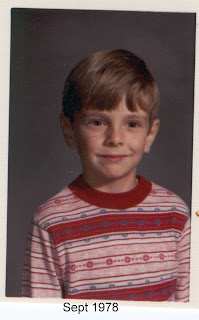