Lead foot down on my accelerator

As usual, it is Heidi's fault.

Heidi dared to obliquely mention Pam Tillis' "Maybe It Was Memphis" in a blog post that she did and it has opened the country music floodgates. I have a pretty low tolerance for country music - although there was a time in the 90s that pop music let me down so much that I had no choice but to defect for a while. I eventually came back home, but that was not until after I had picked up a few guilty pleasures along the way. 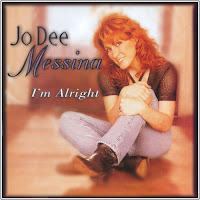 Perhaps the guiltiest of all these was Jo Dee Messina. She really has only one good album - that being 1998's I'm Alright, but as 90s country-pop goes, it's tough to beat. Heidi always disliked Messina because she had this "robotic" quality to her voice, as if there had been a great deal of studio trickery and auto-tuning of her voice. That is not an altogether bad thing (the DVD of Sticky & Sweet is going to have to have some MAJOR auto-tuning done), but it just never appealed to her. Listening to it now, I know she was right.

I, however, loved the cheesy lyrics and stories she told in her songs. One of my favorites is "Bye Bye" which I swear could be a great pop song. She also looks GREAT in this video. She is probably considered fat by industry standards because she does not weigh less than 100 pounds, but the fact that she is not a stick insect is of great relief to me. What the hell do labels know anyway?

Like I said, my flirtation with Messina was brief, but I did pull out I'm Alright this morning while I was getting ready and it sounded pretty good. I had forgotten about how the song "No Time For Tears" managed to turn "tears" into a two-syllable word. Te-ars.
Posted by Dan at 1/20/2009 06:15:00 AM