Actually, despite my previous post professing to love the snow and winter (which I still do), at this point, let's not and say we did.

Last winter we were stuck in an incredibly snowy pattern. I don't know how much snow we got last winter, but it doesn't seem like I fired up the snowblower even half as much as I have this year. It snowed again today. The snowstorm delivered much less than it promised, but it is of the light Canadian variety which will cause great travel problems long after it stops falling.

I cleared the driveway for the what feels like hundredth time this winter today before going to pick Anna up from school, which got out at 1:30 today. As a friend of mine said this morning, Alice Cooper singing "School's...out...at 1:30" just doesn't have the same ring to it.

For those of you who live where there is no snow - whether you usually get snow and haven't gotten any this year or you never get snow - I snapped some pictures of what I'm up against right now. (click photo to enlarge) 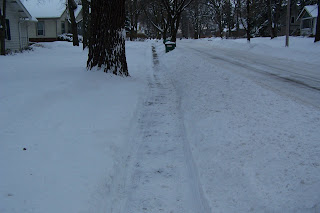 A look down our street. That sidewalk in the foreground is ours. 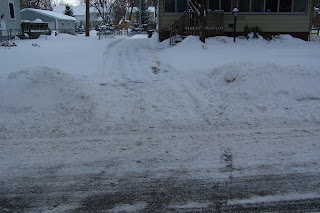 The entrance to the driveway - what I have been able to carve out. By far the worst part to snowblow because it contains all the snow from the street that the plow pushes out of the street. 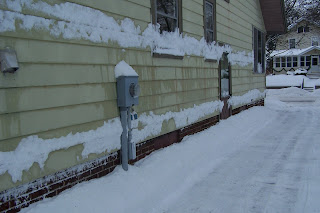 The side of the house down the driveway. That door was recently openable as I lugged all the Christmas stuff to the basement through that door. As it stands now, we won't be using that until the spring. 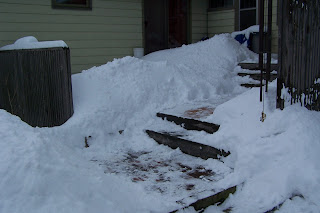 The path that I have dug through the back deck to make it easier to get to the garage. 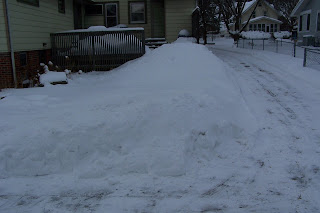 One of the most crucial snow removal places - the turn from the main driveway to the long approach to the street. Heaping mounds of the white stuff mostly thanks to the snowblower, but still. 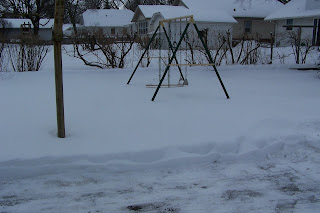 Anna's swing set (and mine from my youth and my mom's from hers) slowly being consumed by snow. Pretty soon we won't see the glider.
We're not to the point where you have to start shoveling the roof, but I'm starting to wonder when that will happen.

What we need is a SERIOUS melt before we get anymore. But that's not likely to happen as there's a 60% chance of snow tomorrow.

And once it does melt, I have no idea where it will go. Actually, I do. Skunk River and Squaw Creek, which will probably result in a repeat of this.

I have been meaning to tell you, I'm sorry to say, that we have to keep that side door cleared so Culligan can deliver our softener salt.

Sorry to report that you'll probably get our "snowprise" storm tomorrow. My condolences...