1) Jeff came up yesterday afternoon to make use of the tonnage of art supplies that Anna received for Christmas. This allowed Heidi and me to go out on our own and naturally, we went to...the University Book Store. We can't decide if that makes us the coolest or lamest married couple ever, but we are erring on the side of cool. Mostly we walked through the aisles of textbooks and muttered "never again" under our breath! Although I was wishing that I could take the class that required Suburban Nation and Crabgrass Frontier as required reading. Of course, if I took a class in which they were required they would immediately be boring.

But perhaps the most awe-inspiring book we found was this one. 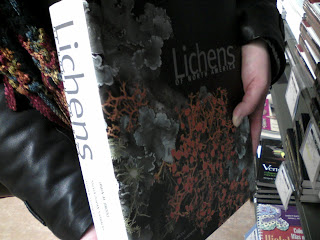 Seriously, I didn't know there was that much to say about lichens of North America!

2) A little later in the evening, we all went out to Carlos O'Kelly's and Jeff related another anecdote from the Madonna book written by her estranged brother. As it turns out, Christopher Ciccone directed a Dolly Parton video ("Peace Train") and there was talk, however brief, of Madonna and Dolly collaborating on an album - as in Dolly sings five of Madonna's songs and Madonna sings five of Dolly's songs. It never happened, but of all the Madonna projects that never came to fruition, that one is probably the one most likely to cause me to wet myself if it ever did materialize.

3) My glasses are crushed. I rolled over onto them as I had left them laying on the floor. Fortunately, I have another pair from one prescription ago so I am not blind, but they are definitely not my most preferred frames. 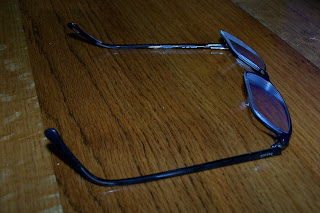 I am going out to Pearle this afternoon to see if they can magically fix them.

4) We finally watched Iron Man last night. Everyone told us we would love it, and we did enjoy it, but in the final analysis I was underwhelmed. The pacing was all off and the more we talked about it, the more it seemed like a pilot for a television series. All in all, I liked The Incredible Hulk better.
Posted by Dan at 1/18/2009 12:25:00 PM

I did enjoy Iron Man...especially the look of Iron Man, which was spot on.

My one complaint? We get about 3 minutes of Iron Man whupping ass. The rest of the movie is either the development of the suit or Iron Man fighting for his life.

I think that was our take on it as well - the climactic battle scene just didn't seem all that climactic. And then it was over!

We did enjoy watching it and it wasn't like we wanted our 2 hours back, but it did not live up to the billing that everyone gave it.