Not quite a thousand words

The picture speaks for itself. 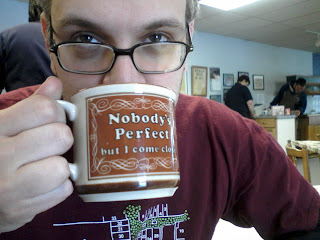 This picture was taken at Heidi's dad's restaurant in Andrew, IA - we drove there and back today. Actually, we drove there and then swung back through Iowa City which is decidedly not on the way back but it had been so long since we'd been to Iowa City that we just thought what the hell? Plus driving I-80 is so much more pleasant than US 30 from Cedar Rapids to Ames. So we hung out at Coral Ridge Mall for a bit and hit Barnes & Noble while Anna played in the playlot and I wondered how many more years it'll be before she's not interested in that at all. I have been struggling a lot recently with her rapidly disappearing kid-ness. Oh, don't get me wrong, I know I have several years left before teenage rebellion and/or ennui sets in, but sometimes the notion that this is my only shot at this gets the better of me.

It was a good trip. I think we were all kind of secretly dreading it because the drive is so long, but it was really good to see her dad again who, because of the distance, we rarely see. I have such mixed feelings on small towns like Andrew. On the one hand, there is this connectedness in small towns that seems to be decidedly absent in larger towns and cities. On the other hand, I could never do a small town again because of the fact that in many of them, if you don't have a great-great-great-grandparent buried in the cemetery, you'll never be "one of them." I feel bad for small towns, because they are withering and blowing away in the wind. And it's only going to get worse.

Personally, I'm not sure I could live in a town smaller than Ames (~50,000 if you count the 25,000 students that attend Iowa State. Believe me, they count.) I don't mean to crap all over small towns. I grew up in a smallish town and had a good childhood, but I really want to give my daughter a wider world-view than what can be afforded in rural small towns these days. And my politics are not really in line with what, let's face it, is and is likely to remain a pretty conservative part of Iowa. Iowa may have gone blue this year, but don't kid yourself.

A good day overall except for the odd clickety-clack sound coming from the back tire area of the car. I was convinced for a while on the way home that the back tires were going to go flying off and we would go careening in the ditch. Fortunately, it did not happen, but I am getting that looked at as soon as possible.
Posted by Dan at 1/24/2009 10:40:00 PM

ah your last few posts have been quite quite delightful and a real highlight of my week. I was reminded of them again today, when (in reference to the Brady Bunch Movie) a girl called Cindy came onto some tv show and in unison darren and I both said "thee you on the theethaw thindy". It's the little moments that count isn't it.

You know, I am so glad you referenced the Brady Bunch Movie! I seriously need to see that again ("And Jan, come back when you're preganant, and you better work!") I had the great misfortune of seeing that with a bunch of people who totally missed the humor in every frame. They sat there stone-faced the entire time when it was a laugh a minute for me.

They probably don't get laid much now.