I have bitched A LOT in this space about how I really do despise the Hard Candy album art. Actually, it doesn't stop with the album art, but every. single. photo. inside the CD booklet as well. As Jeff put it (in his patented "I wish I had thought of that!" way), she seriously looks like she is recovering from a bout of violent stomach flu or diarrhea (or maybe both) in all the photos. The worst offender is probably this one. 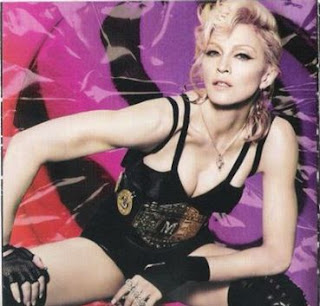 She has a very "pass the Imodium!" look if you ask me.

Anyway, via Boy Culture, some of what would have been the Hard Candy album artwork has finally leaked and, as usual, Matthew Rettenmund is right and they kind of make her look a bit ridiculous. However, I think that it is FAR AND AWAY preferable to what we got. 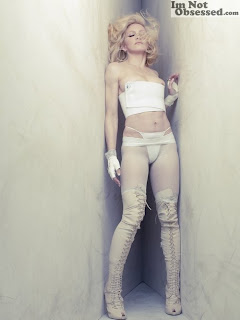 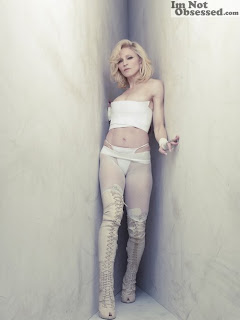 There is still the unnerving emphasis on her crotch, but she at least looks healthy! I love how the windswept shoulder length hair and the prevalance of white makes her look like a naughty angel (but with a soft side)! The photos were still taken after what I believe to be ill-advised plastic surgery. I never expected Madonna to give into the vanity of stardom, but perhaps that was just wishful thinking on my part.

I remain hopeful that the next phase of Madonna's career, no matter what it is, will show her embracing her age rather than running screaming from it.
Posted by Dan at 1/17/2009 12:26:00 PM

I like these better too! Not great, but much much better!

I don't know what it says about me, but I would rarely describe crotch emphasis as "unnerving"...

Well, wait...maybe if they were photos at a funeral? Or a high school graduation party bulletin board full of photos?

I think the thing I have trouble with is that it is just not very age appropriate! And that is not to say that older women cannot be sexy - far from it. But a little subtlety can be a whole lot sexier than opening one's legs for the world to see.