It has taken months and months of watching me play (and also the addition of drums) but Anna is totally sold on Guitar Hero right now. There's a two hour late start for school this morning and instead of watching PBS Kids or the Netflix box, I hear her in there playing Guitar Hero ("Barracuda" to be precise.)

One of the new features of Guitar Hero: World Tour is the ability to make your own rocker. This was too tempting to resist. Both Anna and I have made reasonable approximations of ourselves - or rather, what we would want to look like as rockers.

Here's Anna - looking kind of like a Barbie if you ask me. 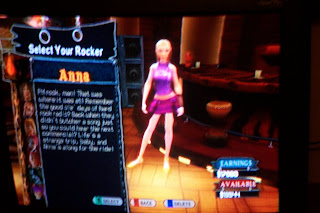 And here's me, if I were actually a rocker with bulky muscles and abs of steel. You can't really tell, but the guy is actually wearing glasses. He's a pretty cool dude, even though I have a mermaid tattoo (Anna's request.) 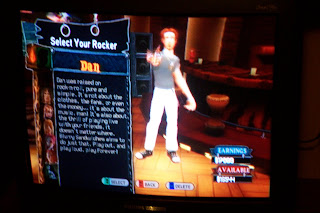 I think that's so awesome that Anna loves Guitar Hero! And the "rocker approximations" are great too! If it were only as easy as pressing a few buttons to have abs of steel...