Once upon a time, just prior to the mp3 revolution, I bought a Dolly Parton CD off of eBay for an absolutely ridiculous amount of money - something like 68 dollars. The CD in question? Rainbow. It was the first album Dolly delivered for CBS/Columbia in what was to be a "one pop album for every country album" deal. One listen to the album and it's easy to realize why the rest of the albums Dolly released while signed to CBS/Columbia were country albums. 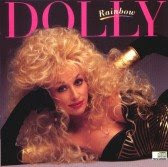 But in spite of this, or perhaps because of it, I fell for the album hook, line and sinker in the fall of 1992. The Iowa City Public Library had a copy of it, and I checked it out. It is yet another album forever married to the fall of 1992, even though Rainbow is completely and utterly lost in its 80s pop production. But I still love the album even though not many people outside diehard Dolly fans are aware of it. My favorite song on the album is "Savin' It For You" (stream) which was actually written by the same guy that wrote Gloria Gaynor's "I Will Survive." Heidi and I laugh hysterically at the bridge, especially that hilarious last line:

Let's say hello a special way
Lovers who love and love to play
You have been all that I can think about
There's never a doubt it's you
And you alone that turns me on
Anticipation now is gone
And we're alone
So just get comfy and, oh yeah, unplug the phone

Anyway, I noticed on Amazon MP3 the other day that the bottom has just dropped out of the Rainbow market. After years and years of being out of print, it is now available for download. Now everyone can experience the cheesefest that is Rainbow, and not have to pay through the nose for it (at $9.90, it's a bargain!)

I also noticed that there is a vinyl copy of Rainbow for sale there. Hmmmmmmm. Must resist.

The interesting coda to the whole 60 dollar Rainbow experience is that a couple years later, I found Dolly's The Great Pretender CD at Stuff, Etc. in Iowa City. I picked it up for $3.99 and then turned around and sold it on eBay for $98. I really wish it had broken into triple digits, but still, a 2500% return on investment isn't too shabby.
Posted by Dan at 1/05/2009 05:46:00 AM

Every time I check in to see if you've updated, I can't get over the size of Dolly's...hair. Now that is a wig.