The brilliance of the Rudd 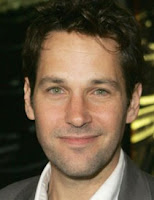 It seems like Paul Rudd is everywhere these days which kind of stands to reason since he's out there hawking a new movie. He's on the cover of Entertainment Weekly this week and there is a great little side article called Rudd on Rudd. My favorite part was, unexpectedly, this:

On Why He Feels a Little Gay

I always thought I'd be a really good gay guy. I love American Idol. I watch Antiques Roadshow like crazy. Guys like Oscar Wilde, Stephen Fry, Elton John - they're all very bright, with a razor-sharp wit. David Sedaris - who's funnier than David Sedaris? The Saturday Night Live that I hosted was such a gay-heavy show. But it didn't even cross my mind until after. The family that kept kissing each other - I didn't even think of that as being gay.

I remember doing interviews for The Object of My Affection and people would say, "What was it like to kiss a guy?" Like it was such a shocking thing. I said, "How many times does anyone ask, 'You had to shoot somebody. Was that weird?" I love gay guys. I feel pretty gay. I'm certainly not the most macho guy in the room. (emphasis mine.)

I bolded the last little bit because I found it so refreshing to hear another straight man utter words that I could basically utter myself. The fact that he's famous is icing on the cake. Because yes, to look at me is not to see the most macho guy in the room. And the gay guys that I know and have known have influenced me in ways that I never expected and changed me for the better.

He seems like such a good guy. And easy on the eyes, too. Guys want to be him, girls (and gay guys) want to be with him. He's king of the world!