It has officially never been more embarrassing to be a Madonna fan than it is right fucking now. Trotting around with Jesus Luz trumps the worst of 1992/1993 when Madonna seemed to be publicly imploding after the Erotica/Sex/Body of Evidence trifecta. I have never been as interested in Madonna's personal life as I am in her work, but this train wreck has even me unable to avert my eyes. 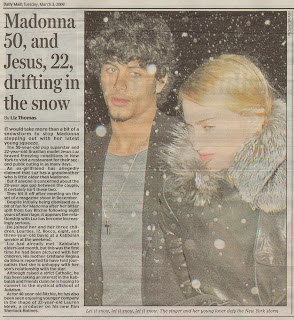 I can't decide if we would or would not be up in arms were the genders reversed and it were a 50 year-old man dating a 22 year-old woman. On one hand, we might not be because that seems to be much more socially acceptable. On the other hand, would we crucify him for taking advantage of a much-younger woman? I don't know.

What I do know is that we are in uncharted territory. Never has Madonna been so off the rails, so seemingly out of control of her own image and in such public meltdown mode. I think that this has to be especially hard on her 12 year old daughter. As if being a teenager isn't already hard enough, having mom behave in this fashion is just providing her with fodder for the inevitable tell-all.

I guess I expected more from Madonna. I expected her to head into the latter part of her life with a little grace and dignity. Perhaps I should have known better. It is not too late, but this is an unfortunate chapter if she does manage to turn it around.

it is better not to treat celebrities as role models! Even Salman Rushdie (the writer) chooses girls half his age to be with. anyway its their life and I dont mind as long as they continue to make good music, write decent books and play well.

I think it wouldn't bother me half as much if it weren't a symptom of a larger problem with her. She doesn't seem to be interested in her work anymore, or rather, she has really stagnated professionally. I blame this mid-life crisis that I never expected from her.

As far as being a role model, I guess I don't view her so much as a role model, but I do admire her body of work. I was just looking forward to these years when maturity trumped other things.

Madonna is different - we like to think she is smart and evolved. And she likes us to think that, but I suspect Kabbalah is a big ego boost.

Her music has suffered, of course. She has so many committments now that I don't know how she has time for anytrhing.

And those kids. Oy. Could she allow them to be in the paparazzi glare any more? I suppose Suri cruise is more whored out though.

About Lola, she's not allowed to watch TV or read magazines, so she may be totally oblivious to her mom's latest escapades. Sure, I bet she's seen some of the men (maybe not?) when they visit, but as for what info she gets from outside sources, I bet that's kept locked up tight.

I think that her spirituality is very authentic in that she truly believes what she believes, but I also do think there is a "look at my red string" component that goes along with it.

I had forgotten about the media blockout imposed on the CicconeLeonRitchie children. While I think Madonna does control what they have access to, I doubt that her daughter lives in a bubble completely and once you hit the teenage years, the bubble pretty much cracks despite what parents try to do.