I keep on hearing lawn mowers running in the neighborhood. Seriously. The grass is not out of its winter dormancy yet!

It is 60 degrees today and it is, as the old Lutheran hymn goes, as if we have been released "from the grave's dark prison." People are out and about. Kids are playing ball on front yards up and down the street. We've taken the plastic off the windows. It's hard not to feel as if the shackles of winter have been lifted on days like today. Granted, in the middle of July, we will all be bitching about the heat and humidity that are part and parcel with Iowa summers, but for now, we'll take it. 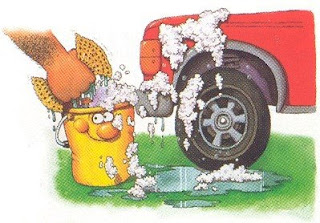 The reason it's strange is because I'm just not one of those guys that alternates between obsessing over the perfectly clean car and the perfectly manicured lawn. It's just not that important to me. I'll clean it when it becomes so bad that I am embarrassed to have people ride in it. Much like my job and the length of the grass in my yard, I am not defined by the cleanliness of my car. My motto should be "failing to meet gender stereotypes since 1972."

But it was time - even I could see that. And Anna enjoyed helping, although her version of "helping" was to run around in the grass like a loon at the car wash while I vacuumed the entire inside of the car and only being able to use the low-pressure presoak and rinse during the washing of the outside. That was hardly the point though - it was more about spending time with my daughter and getting the damn car clean come hell or high water. The only thing I don't really like about those car washes where you "point the gun and shoot" is that the undercarriage doesn't really get all that clean, something that is essential considering the mammoth amount of salt the car is exposed to in the winter.

To paraphrase Tangina from Poltergeist, this car is clean. But Anna left her damn snack bowl in it, thus starting the next descent into disaster, reminding me that only hard work can counter the effects of entropy.
Posted by Dan at 3/15/2009 03:25:00 PM