I bought a new pair of shoes today. It's the first pair of "athletic shoes" I have purchased in several years, probably since we moved to Ames. I am not all that hard on casual shoes. Dress shoes, on the other hand, have a relatively short life span just because I am always wearing them. Anyway, it was time because my other shoes were falling apart so I picked these up today. 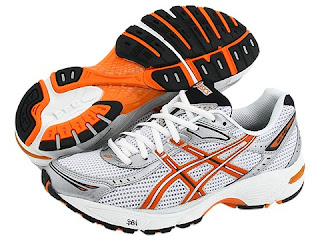 They actually are orange and they look really damn good. Heidi said that the minute she saw them, she knew we would buy them. They cost a little more than I think shoes should cost but they are worth it because they are comfortable and support my arches quite nicely. I mostly don't care what I put on my feet as long as they are comfortable and keep my feet dry, so mostly, I'm easy to please.

But as I was buying them, I couldn't help but think about whether or not I should be buying shoes right now. Every day the economic news just seems to get worse. The stock market is in the toilet, unemployment is higher than it's been since the early 80s and it seems as if there is no end in sight for the downward spiral. While my job is relatively recession-proof, I am a big fan of the "never say never" approach to life and spending $90 on a pair of shoes just seemed so ridiculous to me when so many people don't even have jobs and are behind on house payments. If these kinds of things are happening now, what might things be like in a year?

These are the scariest times I have ever lived through - even worse than being a kid and sure that the world would erupt into a nuclear fireball at any given moment. This time, the threats are real and while not entirely tangible, they feel so much more real than those irrational childhood fears. I don't know if the economy has hit bottom yet. I don't know if what Obama has proposed will work or not. I'm certainly not an economist so perhaps the worst is yet to come or maybe (hopefully) it is behind us.

I mentioned this to Heidi and she said that buying shoes, especially at a small local retailer like where I purchased the shoes, is actually what will stimulate the economy out of the current morass. A part of me intellectually understands that, but another part of me wants to hoard and save everything and spend no more than what we must to live. And any and all extra money goes on the credit card (which we are paying down faster than we have before. EVER.)

The economic boondoggle we're in right now is, as I said, scary. I have no idea how it will affect me when its all said and done. I have talked to my dad about this a few times and he says that ultimately, you have to live in the time that you're living in. Anything else is just wasted energy. And he's right. I wonder if we'll look back on these times in 20 years and view them like we did the late 70s when the world seemed to be spinning out of control, careening toward destruction. There's no way of knowing.

Ok Dan, those trainers (as we would call them in England) are totally worth the money. The funkier colours are totally in this year and pair them with a bright tshirt, and you will be the belle of the ball. Oh who am i kidding, you are already :)

Lovely colour. I am searching for a similar colour but of course it has to be adidas. More the orange, better it is. Will grab my van nistelrooy jersey and head for the football ground.

About recession and economy, my views might change later when i am looking for job or when i am earning but at present i believe in living for the present. It is better to spend when you can.