The pattern of my life

The pattern of my life is, apparently, an ink spot. Or several score of them.

Yesterday when I was working. I got an e-mail from Heidi with the following subject line:

A stowaway pen in one of my pants pockets had stained every single item of white clothing in that load. She was venting. I immediately called home to offer my mea culpa. Anna was especially peeved since it had stained one of her favorite pajamas.

This is what happened to one of my white T-shirts. 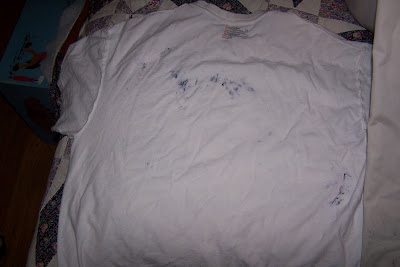 This has not happened in a long time. It used to happen all the time. If I have but one fault (which I'm not s ure how it's possible because I have none), it is that I cannot be bothered to clean out my pants pockets. This caused some strife early in our marriage as ballpoint pens routinely went through the wash, staining everything their path. The problem stemmed from a fundamental disagreement. Heidi felt that it was the job of the person taking off the pants to empty their pockets, whereas I felt it was the job of the person sorting laundry. This is a bit hypocritical because I have done a fair amount of sorting of laundry in my day, and yet, ink stains still happened. Apparently, I just didn't want to be bothered with it regardless of whether I'm sorting or not.

Realizing that this was a fight that I would never win, I have been MUCH better about emptying my pants pockets. But a rogue pen still slips through, even though it's probably been at least 3-4 years since we've had ink carnage of this magnitude.

The funny part of all of this is that it was mostly my clothes that were damaged. The pants, I think, are beyond repair but that's okay because they were starting to get a hole in the pant leg. 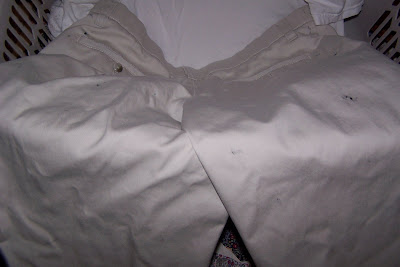 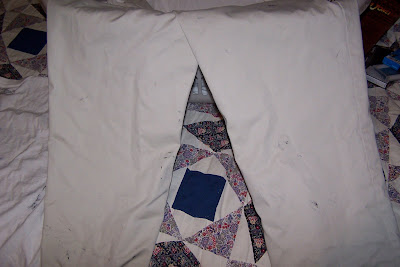 The rest of what was damaged was clothing that is mostly under other articles of clothing so, not to worry. Besides, T-shirts and socks are cheap.

But in surveying the damage, I found that another of my bad habits actually saved some of the clothes. My complete and utter inability to turn clothes right side out after taking them off meant that it was mostly the insides of the shirts that were stained. Miraculously, the other side seems pretty much untouched, although that makes no logical sense.

It will not be the last pen to go through the wash for I am me and am nothing if not absent-minded. But Heidi washed a flash drive left in HER pants pocket the other day so at least we're karmically even. Or something like that.
Posted by Dan at 3/09/2009 02:42:00 PM

This is a very Monica Lewinksy story! Except not as good.

Yes, no cum-stained blue dress. I'm such a disappointment! ;)