The Pet Shop Boys have a new album coming out this month (abroad anyway.) I am what can be classified as a mild fan of the Boys, as in the new album is on my radar, but it's not one of those hotly anticipated albums that I will be dying to get the instant it is released. Perhaps at some point, but they were just a band that I never really got all that into beyond the hits.

Anyway, there's a new B-side out and it's called "We're All Criminals Now."

I have not actually heard it, but it is cracking me up already. There's a pretty good reason for this. 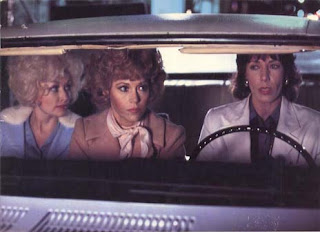 A bit of background: I am of the opinion there is no life situation, quandary or dilemma that cannot be satisfied with a quote from 9 to 5. Your car starts making a weird sound, cue Dolly saying "Good Lord, get out, let's look at it." I'm looking all over the house for where I set my coffee cup, cue Lily saying "Where is the coffee cup???" A particularly grueling day at work can cause me to say to Heidi, "I need a drink, Roz. I'm taking the rest of the day off." To which she will respond "Attagirl." I have trained her well. She is the most perfect wife EVER.

Anyway, this song (naturally) made me think of the part in 9 to 5 where Dolly, Lily and Jane have stolen what they thought was Mr. Hart's corpse from the hospital, only to find out it's actually the body of some guy who's been the victim of a mob hit. Jane says "We're not criminal, you're a not a criminal. It was an accident. We'll just turn around and take it back." Dolly replies, "Well, we're criminals now!! We've just stolen a corpse from the hospital - that sounds like criminal to me."

That movie is one of the most perfect movies ever. God help anyone who tries to remake it. As Violet herself would say, "I will not be responsible for my actions."
Posted by Dan at 3/15/2009 12:24:00 AM

I used to really like The Pet Shop Boys a lot and I believe we have about 4 of their CDs. I just asked my husband if he knew they were releasing a new CD and he told me yes. I should have known that he'd know. He knows everything! Thanks for informing me, though. I just might have to pick it up :)

I am so with you, Dan, on quotes from 9 to 5 being pertinent to all life's situations. I love the line where Lily tells the hospital attendant to "piss off" after realizing she stole a doctor's coat. Classic!

I am a huge fan of PSB and have to have all their stuff, no matter what. Mind you, many of their remixes and such are not the best, but I still have to buy everything they put out. The leaked songs have been great and have me ready for my copy to come in hopefully not many days after the March 23 release.