Save me from the blast

I had the great fortune tonight to have the pair of bonus tracks from the UK release of The Annie Lennox Collection end up in my inbox. They are acoustic versions of two classic Annie songs - "Walking On Broken Glass" and "Little Bird." As an added bonus, they do not appear to be live tracks, but rather newly recorded studio versions of these songs. (someone correct me if I am wrong.) 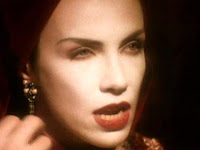 The version of "Walking On Broken Glass" is the better of the two, although "Little Bird" is also quite good. I have always felt like "Walking On Broken Glass" is unfairly punished because it had the nerve to become a hit on radio. But really, at the time it was released, it sounded like nothing else on the radio. The video was brilliant and features Annie, Hugh Laurie and John Malkovich going all Dangerous Liasons on us. But yes, radio played it to death, even though, surprisingly, it was not a top ten hit.

I remember sitting in a cubicle at the Iowa City Public Library in 1992 listening to the radio on my Walkman studying for an anatomy exam (a real anatomy exam you pervs) and hearing this song for the very first time. I hadn't bought the album yet and wouldn't until January of the next year, but the song pulled me in instantly. Despite that, even for me, this song more than ran its course. But I have always loved the line "Take me from the wreckage/Save me from the blast."

What this version of the song does is intelligently reinvent the song and while it is still recognizable, it is a completely different song. It is one that even haters of the song from its overplay on radio might be able to see past. Because it is a great song, well-written and, even today, like nothing else out there. Even Annie hasn't repeated herself in this respect yet.

I keep on saying that Annie Lennox is a class act because she is. She is an example of how to grow old gracefully in the music industry. I was talking to a friend tonight and I mentioned how she stands in stark contrast to Madonna these days. His comment was that a middle ground between the two would be ideal. Madonna needs to calm the hell down, and Annie could stand to "to vamp it up and discofy it a bit" (his words.) But I will still take Annie as she is, because I share the streak of melancholy that permeates some of her best work. She is adult about her music, and as I get older, the more I appreciate that.

Finally, here's a link to a great Annie article in Out magazine. My favorite part is when she talks about how the first time she played the flute she hyperventilated and threw up all over the floor and had to be sent home from school. On a more serious note, I also appreciated her comments on how she related to the "coming out" process even though she is heterosexual.
Posted by Dan at 3/10/2009 08:36:00 PM

100% agree with everything you said here.I was so sad that Shining Light stiffed outside the british top 40 :( Hopefully the album will do well.

You are so right. These new studio (I'm assuming too) are fantastic and reinvent both songs. I've always liked "Broken Glass" .. the opening piano licks are unmistakable.

And to Paul's point, "Shining Light" debuted at #50 on the UK chart. Very disappointing for such an awesome song.

... and now I need to listen to Walking on Broken Glass. :) I still love that song.