The Real Slim Shady Stands Up

Yep, I'll be the 5 millionth liberal with a blog to blog Eminem's newest video. Color me impressed (although I wasn't initially, but I've come to expect that from my reactions to Eminem's work.)

Be sure to watch the video here.

Update: Here's another article from Alternet -- Eminem, Anti-Hero. I swear, I have new respect for this man. I think I'm going to buy his new CD just on principle.

The New Yorker: Kerry for Prez

I guess the New Yorker magazine hasn't ever endorsed a candidate for president. But this year, they have. And it is scathing to Dubya. In the last third of the editorial, this paragraph sums up pretty much how I've been feeling and puts into a few sentences the gross incompetence of Bush and his neocon cronies.

The damage visited upon America, and upon America’s standing in the world, by the Bush Administration’s reckless mishandling of the public trust will not easily be undone. And for many voters the desire to see the damage arrested is reason enough to vote for John Kerry. But the challenger has more to offer than the fact that he is not George W. Bush. In every crucial area of concern to Americans (the economy, health care, the environment, Social Security, the judiciary, national security, foreign policy, the war in Iraq, the fight against terrorism), Kerry offers a clear, corrective alternative to Bush’s curious blend of smugness, radicalism, and demagoguery. Pollsters like to ask voters which candidate they’d most like to have a beer with, and on that metric Bush always wins. We prefer to ask which candidate is better suited to the governance of our nation.

I was talking to the lady who cuts my hair and she's not even going to vote because she hasn't paid attention to politics this year. All I can say to this is (in my best Chandler Bing mode) "OH MY GOD!" I just can't understand how Bush might end up the president for the next four years. I try to stay positive, I read all my favorite lefty blogs and news sources, but the trouble there is the danger of ending up in an echo chamber. That was ultimately the biggest trap of the Dean campaign. Towards the end when you were checking Blog for America every 5 minutes and surrounding yourself with people who agreed with each other all the time, you lost a lot of your objectivity.

I just hope that election night turns out the right way. I hope Kerry blows Bush out of the water. I hope he wins by a much larger margin than anyone's expecting. If not, may God help us, because we're sure gonna need it.

This is a frightening (although I think it borders on overreaction) possible scenario which, according to John Dean, we might be seeing in a mere week.

Always love to hear what Cher thinks about things, even though, unfortunately, she didn't come across as incredibly intelligent (what with referring to Supreme Court justices as Superior Court justices.)

And that picture has *got* to be one of the most hideous pictures of Cher that I've ever seen.

Finished watching Omen III: The Final Conflict this afternoon. Man, that movie simply sucks. There's no two ways about it. I can't believe how that series of movies went downhill so fast. I mean, Damien: Omen II was at least tolerable, but TFC was pretty much beyond redemption.

I wonder what Sam Neill thinks of that.

I think the thing that got me the most was how Damien was kind of like an evil John Edwards. And I'm apparently not the only person to think this (although I swear I thought of it before I saw the web site.) :)

(Didn't Know I Was) Unamerican

(didn't know I was) unamerican

This came via Metafilter. It's a little bit over the top but I think we need to get this message out to everyone. I don't have any grand illusions that my blog is going to put this into the "This Land" category, but I just want to do my part.

A Romantic Comedy. With Zombies.

Wendy was here for the weekend and we went to see Shaun of the Dead which so many people have told me that I need to see so I figured I really must need to see it. If people are seeking me out and specifically telling me that I'll enjoy this movie, it's definitely something that I need to go see. We went down to Jordan Creek Town Center in West Des Moines as it wasn't playing anywhere in Ames and even though JCTC is repulsive in its "buy something, you'll feel better" atmosphere, the theaters are pretty cool. As Wendy said, Jordan Creek makes Coral Ridge Mall look positively quaint.

But anyway, the movie. It was fantastic. It had slow zombies (as opposed to the fast ones from 28 Days Later and the Dawn of the Dead remake.) I think I can say without any hesitation that I truly do prefer the slow zombies. The fast ones were scary and all, but zombies are so much about the power of the mob. These zombies were George Romero slow, but they were no less deadly than the fast ones. And with all these zombies lumbering about, there is just this undeniable sense of dread that seems to be pushed to the back burner in the fast zombies movies. That's not to say that the 28DL and DOTD (2004) aren't scary films. In fact, I applaud these movies for resisting the overwhelming urge to play for laughs as well as scares. (see the rapid deterioration of the Nightmare on Elm Street movies.)

But Shaun of the Dead was one of those rare films where the laughs and the scares really played well off of each other. It's got to be the only movie where a zombie gets beat up to Queen's "Don't Stop Me Now" or where zombies are being attacked with record albums (the Batman soundtrack, most notably.) And then there's the love story as well, which was fun.

Definitely a buyer when it comes out on DVD. In the meantime, I'll just have to settle for the DVD release of DOTD (2004) which comes out on October 26th.

The Wheels on Madonna's Bus

Anna loves this video. I'm not sure where they got the Madonna sound alike, but it's pretty much dead on. And it's hilarious how well the nursery rhyme fits in with the backing track from "Ray of Light."

More videos at mothergooserocks.com. While you're there, check out the Chumbawumba inspired "Humpty Dumpty" and especially the Cher-ish version of "Old Woman Who Lived In A Shoe." 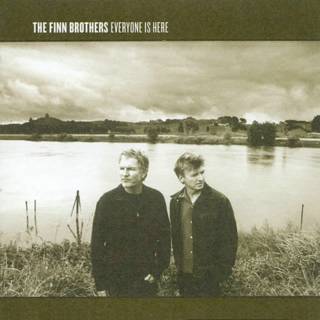 Finn Brothers -- Everyone Is Here

I've been listening to a lot of this CD recently. It's Tim and Neil Finn of Split Enz and Crowded House and various solo careers. My sister Wendy just adores Neil Finn--she probably has one of the most complete collections of his music (thanks in large part to Napster) of just about anyone on the planet. I don't usually go so much for it, although I did listen to a fair amount of Crowded House when I was in college. However, there's something about this CD that just appeals to me on a gut level. I don't know if it's the time of year (probably is--fall always gets me into more serious music) but this isn't exactly deep down serious stuff either. But it does have some meat to it which is kind of fun and it serves as a brief respite from the pop that usually dominates my listening landscape.

Jon Stewart to Tucker Carlson: "You're a dick"

AlterNet: Election 2004: Jon Stewart to Tucker Carlson: "You're a dick"

The best thing about this is that when Jon Stewart was talking, I'm sure a lot of the audience members (as well as Begala and Carlson) thought he was trying to be funny. But he was as serious as a heart attack.

Trying to find the video link, but am so far unsuccessful. Will post it later.

Update: Here's the link to the video. (via Waxy.org)

I haven't waxed political here in a long time, but this is absolutely positively required reading for anyone even considering voting for Bush. Maybe a vote for Kerry won't result in anything different, but you simply need to read this.

The Option Nobody's Pushing. Yet.

Granted I'm probably on the high end of the draft age, but still. There's no way on God's green Earth that you'll get me to leave my little girl to go fight in a stupid war that never should have happened.

The debate made me feel positive for the first time in forever, but I'm still waiting for an October surprise. And even if Kerry gets elected, we'll be decades undoing the damage that this president has done. I'm with Janeane Garofalo (even though she took a ton of heat for this statement): "a vote for Bush is a character flaw." Plain and simple.