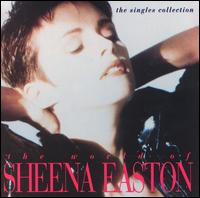 Anna and I have been listening to this extremely cheesy CD recently while she plays with her Barbie Princess & The Pauper Castle--which was her reward for a very successful foray into potty training. This is a CD that I bought in the summer of 1993 to replace another Sheena Easton best-of CD that I had which was woefully incomplete. And by woefully incomplete it was 19 tracks vs. 10 tracks, so one can hardly blame me for trading up.

It has all the best known stuff--"Morning Train (9 to 5)", "Telefone (Long Distance Love Affair)", and "Strut." But it also contains the lesser known but absolutely fabulous "So Far So Good" which is just a great pop song and is about as close to perfect as pop gets. Add this to the fact that it's from About Last Night... and, well, how can you possibly go wrong? The rest of it is pretty much standard 80s cheesefest. The production on tracks such as "Machinery" and "Devil in a Fast Car" (both minor hits that I'd never heard before this compliation) postiviely reeks leg warmers and Rubik's cubes. But yet, there's something oddly intriguing that pulls you into "Machinery"--of course, it could be the fact that the word "machinery" is in a song, let alone the title of the song but who knows.

Sheena's voice is always kind of weak--or at least never the strongest. But these are pretty slight songs, so it's not that big of a deal. It'd actually be a little bit disturbing to hear a big Streisand or Celine Dion-ish voice doing these songs. I always remember the running gag on "Just Say Julie" about how Sheena sold her soul to the devil for success.

The songs are fun, but they're not going to light the world on fire. But they make for a fun time playing with my daughter. Moments like that you can't put a price tag on.

Tin roof's burnt to a crisp!

I have a love/hate relationship with the song, but it's undeniably catchy and undeniably a part of my senior year of high school. 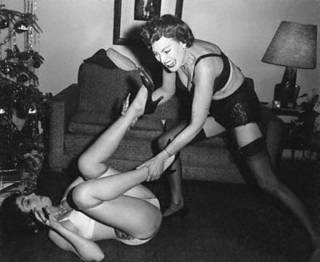 This is, once again, shamelessly stolen from another blog--Planet Dan in this instance. But if ever a picture begged for a captioning contest, this one's it. Heidi's come up with the best one so far:

"Hilda was very unhappy when she found out that Barbara was wearing her favorite pair of underwear."

And don't ask me what the origin of the picture is because I have absolutely no freaking idea.

Should be in bed

...because it's freaking 12:54AM and I have to get up and take the car to the shop at 8AM tomorrow. Oh well, I can always throw a hat on--it's not like I have to impress these people with my devastatingly good looks. *rolls eyes* I'm stuck in a rut tonight listening to music, putting the finishing touches on Jeff's annual CD that I make him every Christmas. We're getting together on Friday to have our Christmas which will be fun. Anna is always happy to see Jeff because he dotes on her like crazy and showers her with attention. I'm so excited to give him his Christmas present because it was a total coup on my part. I don't dare mention it here until after Christmas in case he reads this (I don't think he does, but who'd want their Christmas present ruined that way?)

I found out today that Andy Bell of Erasure is HIV positive. Not good news.

Other than that, I'm off work today and tomorrow which is weird--I don't usually get two days in a row off during the week--but I'm not going to look a gift horse in the mouth. I hope to get some shopping for Heidi done sometime tomorrow. I tried today but Anna just didn't cooperate with me and we ended up just heading for the library and hanging out there. Heidi's been sick the last couple days and we were trying to get out of her hair.

I'm reading this book called What's The Matter With Kansas? and it's (so far) been very enlightening. I was expecting yet another left-wing diatribe against conservatism, and although there is that, it's much more subdued than anything else I've ever read on the topic. I was telling Heidi that if the book is doing any one thing, it's helping me to understand moderate Republicans a little bit better. I still don't get the right wing crackpots like Ann Coulter and Sean Hannity, but the more moderate Republicans are a different breed. They agree with the power of the market and that taxes are bad which I still think is misguided, but they're not all running around like chickens with their heads cut off being one issue voters on abortion or gay rights or anything like that. Some of them are even *gasp* compassionate and tolerant. It's so interesting to read the infighting in the Kansas Republican Party between the moderates and the ultra-right wing conservatives. I still have a hard time believing that you can support Bush and claim to be a moderate because Bush really is anything but, but I have a better understanding. And isn't that what reading is supposed to do?

Found this via Metafilter, natch. This is so damn impressive--a guy attempts to recreate some photos taken of Chicago 50 years ago. The results are shocking and rather sad for the most part. But it's defintely worth a look-see.
Posted by Dan at 12/13/2004 12:17:00 AM No comments:

Ever since the advent of CD burners, I've been remaking old mix tapes from my past into CDs. Only trouble is, the tapes I bought were usually 90-100 minutes long and CDs can only hold 80 minutes worth of music. Consequently, I've always had to make crucial cuts which, while necessary, compromised the original integrity of the mix I made. The thing that's hard to remember in this day and age of instant custom CDs is how much of a time sink making mix tapes used to be, so making any kind of cut was akin to cutting off a finger or taking out a kidney.

Anyway, now that we have iTunes and iPods, I no longer have to make such cuts. And we're getting into the time of the year where I listen to a lot of Streisand. (just take a look at my Audioscrobbler page for more evidence of this) I came across a tape that is so chock full of memories of my time in Ames as a student that I had to make a playlist out of it. It's a tape I made called "Highlights from 'Just For The Record...'" which I made from the Barbra Streisand box set. I remember so vividly walking all over the ISU campus with that playing in my headphones (nerd alert!) and I figured, what with us being back in Ames, what a great time to remake it. Here's the playlist:

Don't Rain On My Parade
Starting Here, Starting Now
You Wanna Bet
On A Clear Day (You Can See Forever)
People
Stoney End
You're The Top! (w/ Ryan O'Neal)
Evergreen (Demo/Soundtrack Version)
The Singer
We've Only Just Begun
Hello Dolly!
Second Hand Rose/"My Name Is Barbra" Medley
Ding Dong! The Witch Is Dead
Guilty
You Don't Bring Me Flowers (w/ Neil Diamond)
I Know Him So Well
Putting It Together
Excerpts from "The Judy Garland Show"
Miss Marmelstein
Keeping Out Of Mischief Now
Who's Afraid Of The Big Bad Wolf
Lover Come Back To Me
Spring Can Really Hang You Up The Most
Have I Stayed Too Long At The Fair/Look At That Face
Here We Are At Last
Over The Rainbow

Like I said--probably only appeals to me, but hey, who cares?

I just got done watching John Carpenter's The Thing (checked it out from the library) and it wasn't a bad little horror flick. It had some genuinely good scares in it (which is always a pleasant surprise--I always feel like I've become so jaded by horror films that nothing really scares me all that much anymore) and really good special effects for the early 80s. Watching films like that reminds me of how "lazy" a lot of filmmakers have become by relying on CGI special effects so much. I'm not so stupid to thing that a movie like Lord of the Rings could have ever been made without the miracle of CG technology, but it's always heartening to see good use of makeup and foam latex and other such things.

The movie was good--I did grow a bit weary of the whole "which one of the guys can be the most macho?" thing that seemed to persist throughout. It was also really a dark movie--the contrasts between black weren't all that profound so it was hard to watch and tell what exactly was going on sometimes. I think a lot of that had to do with the fact that I was watching it on my computer because I don't want Anna watching this kind of stuff until she's older and can make conscious decisions about it.

And for just about everything you ever wanted to know about the move (spoilers as well, so be warned) go to this unofficial The Thing site which is pretty comprehensive and cool.