The Sun Is Burning 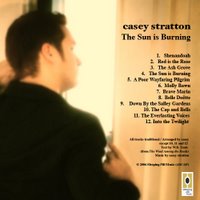 I'm really into the latest project Casey Stratton has put out on his web site -- a collection of traditional folk songs called The Sun Is Burning. He released it last week on St. Patrick's Day -- which is fitting because the bulk of it is Irish folk songs (although there is a French one thrown in for good measure.)

Funny thing is I wouldn't have suspected that I would like it as much as I do, traditional Irish folk music is not something that I normally listen to. It helps a lot that Casey does a fantastic job interpreting these songs -- the production isn't fancy at all, but that actually helps a lot. These are folk songs after all, they don't really fit fancy arrangements or state-of-the-art production.

I had to laugh when I started listening to the song "The Ash Grove" because I swore that I knew the tune from somewhere, but just couldn't place it. As it turns out, it's the tune to the old Lutheran hymn "Sent Forth By God's Blessing" -- the lyrics of which you can't find anywhere on the web because apparently us Lutherans are sticklers for copyright. But it's a great interpretation of the song. It's been fun investigating the origins of these songs that I previously hadn't been exposed to.

And on the other end of the Casey spectrum, I found his techno-ambient cover of New Order's "Regret" on iTunes. Yay--because I was about to spring for the whole Blue Order: A Tribute To New Order CD just to get that one track. Glad I didn't have to. "Regret" is probably my favorite New Order track, and I just love Casey's version of it.

Well, I think I've finally coughed up the last of the crud that infected all of us last week. I still have this dry, hacky cough, but I feel so much better. There's nothing like being sick to remind you of how good you feel the rest of the time! Anna's on day 8 of her antibiotic for her ear infection, and I asked her if her ear still hurt, to which she replied, "it's still kind of loud" which I assume means that it's full of fluid, but she says it doesn't hurt anymore.

In completely unrelated news, the other night I dreamt that I was walking down the street with Anna and someone we were about to meet was walking a skunk on a leash. Now, I figured this had to mean something, and sure enough it does. And sure enough, it's something bad. To see a skunk in your dream means either 1) you're driving people away or turning people off or 2) all is calm with the situation an you don't particularly like it or agree with it. Not sure what to make of that, but obviously hope it's not the former!

I've never actually seen a wild skunk, which is something else because they're not exactly uncommon in Iowa. However, I've sure smelled them while driving at night in the country. But I guess they are nocturnal, and plus, who really wants to meet up with a skunk? It's one of the animals that the CDC automatically considers rabid in the case of a bite and therefore you get to have the series of not entirely fun (but not as bad as popular urban folklore would have you believe) rabies shots. And besides, they stink anyway.
Posted by Dan at 3/21/2006 11:10:00 PM No comments:

Down with the sickness

Ugh...we've got plague at our house. And Anna was definitely Patient Zero in this infestation. She ran almost frighteningly high fevers on Thursday and Friday -- so much so that we ended up taking her into the clinic just to make sure there wasn't something worse going on than what we could see. Then Friday afternoon, I came home from work with all-over body aches and by the time I went to bed at 9pm, I was so achy and chilled that I pretty much would rather have been dead (dramatic, I know!) And then last night, it hit Heidi just about the same way.

Anna's pretty much recovered, although she still hacks a lot ("Daddy, I don't wanna cough forever!") I have lovely junk in my lungs and my chest hurts from coughing. And what's better is my sister moved back to my parents' house this weekend, but not before being infected with whatever this is. And then add into the picture the fact that my brother and his wife are here from Arizona and will likely get infected as well. Happy spring break!

But I haven't been able to get that Richard Cheese version of "Down With The Sickness" out of my head since this all started -- you know the one that was in the remake of Dawn of the Dead a couple years back. Something about "you fucker get up, come on get down with the sickness" done in a lounge lizard version just tickles my funny bone.
Posted by Dan at 3/12/2006 09:53:00 AM No comments:

So I stayed up and watched the Oscars last night like we've done every year since whatever year it was that Braveheart won Best Picture and I can't help but feel like someone pulled the rug out from underneath me while I wasn't looking. I have to say that I was stunned when Brokeback Mountain didn't win Best Picture. Wait -- that's not entirely true. I did watch Crash last week because I knew it had a chance of sneaking in and taking Best Picture, so it didn't come as a complete shock when Jack Nicholson read that film's name at the end of the Oscar telecast last night. It's a good film -- and after I got done watching it, I said to myself, "Now, if that wins Best Picture instead of Brokeback, I won't feel too bad." And truthfully, it was a good film. Not the best movie I've ever seen in my life, but still very capable.

But for some reason, I still can't get over Brokeback Mountain not winning. A lot of the blogs this morning and screaming "homophobia!" which I'm not sure I entirely agree with. While the case could be made that even members of the generally liberal AMPAS were turned off by the subject matter of Brokeback, I'm more inclined to think that Brokeback Mountain suffered from the split-the-difference factor that seems to have become more common in recent Oscar years. What I think happened is that a lot of Academy members decided to vote for Brokeback by voting for Ang Lee's direction, and then to recognize Crash's Paul Haggis by voting for Crash for Best Picture. At least that's what I'd like to believe anyway, and for the most part, I don't think there was some conspiracy to cheat Brokeback out of the Best Picture Oscar. There's certainly plenty of precedence for splitting the Best Director/Best Picture Oscar.

But a part of me just can't get the bad taste out of my mouth. Perhaps it's because Brokeback affected me much more deeply than Crash did and on that alone, I feel it was the best film of the year. I know that Heidi will disagree with me, and Jeff will too. It's silly to admit, but every time I heard that Brokeback theme "The Wings" during the Oscars, I just started to tear up a little bit. I'm not sure why, but I just did. I'm very glad that the score won the Oscar, because it is by far the most original score I've heard in a while and it fit the movie just perfectly. And besides, even though John Williams has lost 40 Oscars, he's won five which is probably more than this guy will ever win in his lifetime.

Perhaps the biggest disappointment of the night for me was reserved for the usually uneventfuly Best Original Song. I so wanted Dolly Parton to win and it seemed like she was poised to win, but then that utterly ridiculous rap song from Hustle & Flow beat her out in the end. To her credit, Dolly seemed genuinely happy for them, but I couldn't help but think about the relatively few opportunities Dolly Parton is going to have to win an Oscar. Not that it matters to her, I'm sure. She has a closet full of awards I'm sure, but I just felt like an Oscar would be a good way to reward her 40+ year career of songwriting. But I suppose that's not what the Oscars are about, really. And as Heidi pointed out, how many more chances are the guys who won going to get at Oscar? Valid point.

So overall, it was kind of a disappointing Oscar year because the one big upset was half-predicted and then everything else fell right into the place where all the Oscar prognositcators said. And in the end, it's just the fucking Oscars.
Posted by Dan at 3/06/2006 12:20:00 PM No comments: