It's gonna be light

Blogging, that is. Expect some light blogging for the next week or so. My computer's on the blink -- I think it's the motherboard -- and so I'm currently writing on my 4 year old's computer sitting on her little chair at her little table. So don't expect much. But fear not, I shall return soon.
Posted by Dan at 12/27/2005 08:31:00 AM 1 comment: 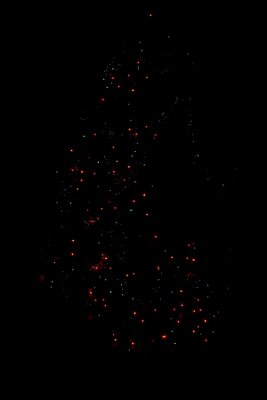 Well, thanks to our cats, our Christmas tree has had a stroke. The above picture isn't the greatest (click to see a bigger view -- it's hard to get a picture of Christmas lights no matter how hard you try) but the entire upper right hand side has no lights any longer. And I sure can't figure out what the hell happened. A part of me doesn't even want to fix it -- exceptional amount of work for only one more week till Christmas -- but I suppose I probably will.
Posted by Dan at 12/19/2005 08:48:00 AM No comments:

I kinda figured it wouldn't take long for the right-wing in this country to come out swinging against Brokeback Mountain now that it's racked up some impressive critics' awards and is all but assured a bevy of nominations at this year's Academy Awards. I had read somewhere that conservative groups were deliberately not fanning the flames of controversy as to not draw too much attention to the story's gay plotline. But once awards started getting heaped upon it, they had no other choice.

I wonder how many of the people speaking out against it have actually seen the movie. I've read the short story upon which the movie is based and let me tell you, while the story is definitely about two gay ranch hands, there's so much more to it than that. It's about relationships, it's about the inevitable heartbreak that comes from trying to be something that you're not. It's about how even had Ennis Del Mar and Jack Twist had the words to express their feelings for each other, the societal mores of the time would have squashed them like a bug. But ultimately, to me, the story is about missed opportunity, and how much it can hurt when the opportunity you missed was true love.

I'm lucky -- I get to spend every day with the woman that I love more than anyone in the world (with the possible exception of my daughter, who I love in a completely different way.) But I think that for so many people in this world, gay or straight or somewhere in between, true love misses them, whether by a mile or an inch. In the short story, the ache just emanates off the page. I couldn't help but feel pain and heartbreak for Ennis and Jack. I won't let Heidi read the story before we see the movie because I think that the movie experience might be diluted for her if she knows specific plot points.

I really wish there was more tolerance in this country. I mean, I'm by no means the most tolerant person in the world -- my feelings toward the extreme right-wing and "religious" right in this country would mark me as a liar were I to make that claim. But I just hope that someday people will realize that love is love, and the validity and importance of that love is not cheapened or less valuable by who they choose to love.
Posted by Dan at 12/15/2005 09:02:00 AM 1 comment: 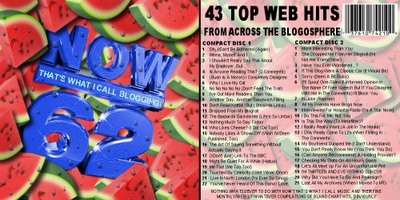 This image has been making the rounds in the blogosphere, but it doesn't make it any less funny. My personal favorite -- I'M THIRTEEN AND EVERYTHING SUCKS!!
Posted by Dan at 12/15/2005 07:23:00 AM No comments:

How many copies do I really need to own? 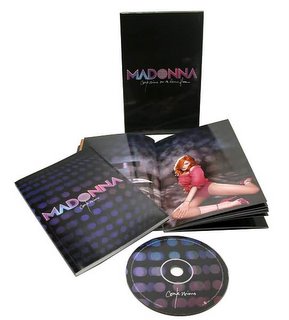 Madonna, how much of my money are you eventually going to get from your Confessions on a Dance Floor project? I bought the regular CD the day it was released because I wanted the continuous mix, but I also wanted instant gratification that morning so I bought the unmixed version of the CD on iTunes for $9.99. Overall, that only cost me $20.00 because the CD was on sale at Target for 10 bucks.

I vowed that I wouldn't purchased the limited edition that's coming out tomorrow. Even though it has a bonus track "Fighting Spirit." And a year long membership to her official fan club ICON which would gain me access to yet another bonus track called "Super Pop." And I'm not one to join fan clubs because they're mostly just ways to suck money out of fans. Additionally, I'd get the 40 page book with more photos from the photo shoot.

*sigh* I guess she'll probably get more of my money. But I'll wait to see if someone buys it for me for Christmas first as I told Heidi that's a good thing to tell people to get me if they're having trouble. That way, Madonna would get someone else's money for a change!
Posted by Dan at 12/12/2005 12:27:00 PM 1 comment:

We got all our Christmas stuff up last weekend and it's nice to actually have snow this year. Anna has no concept of the fact that Christmas is still two weeks away so she continually asks "Is it Christmas yet?" She loves the ornaments and Heidi and I love getting them out every year because it's like a trip down memory lane each year. Rather than being all anal and having deliberate themes for our tree every year (I remember one year my mom didn't have anything but Santa ornaments on her tree), we enjoy having the mishmash of ornaments that we have. It really represents us--a mishmash of all our life histories.

I don't really want much for Christmas and have had tons of fun shopping for people this year. Anna's so easy to shop for and everyone just showers stuff on her as she's the only grandchild in either of our families. I asked her to pose by the tree for me when we put it up, so here she is in Santa hat and everything. 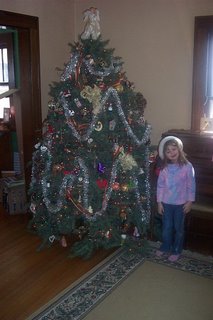 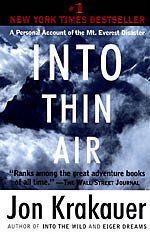 I finished reading Jon Krakauer's Into Thin Air last week. It was an amazingly fast read--truly one of those books that I couldn't put down, staying up way too late because I just had to read to the end of the chapter. I'm not sure what got me to pick up this book in the first place--I'm not really all that much of a fan of stories with guys climbing mountains acting all macho, not really being a macho mountain-climbing type of guy myself. Perhaps it was the $1.00 price tag at 1/2 Price Books in Minneapolis--that combined with the fact that I had really enjoyed Krakauer's book on Mormon fundamentalism, Under The Banner of Heaven. Whatever the reason, I read it and sure am glad that I did.

The story takes place in 1996, with Krakauer joining a guided expedition to the top of Mt. Everest. However, during that season, a freak storm came upon their expedition on their way down the mountain, resulting in the deadliest season on the mountain since it was first summitted in 1953. Krakuer, being a seasoned climber, goes into great detail about the specifics of the climb and you meet a colorful cast of characters (mostly the macho, mountain-climbing type guys.) Although there are a lot of characters, I never really found myself wondering "OK, now who is that again?" as is common in a lot of books such as this. And although there is a lot of techincal mountain climbing jargon, I never found it difficult to understand what Krakauer was talking about.

Krakauer (obviously) survived his encounter with Everest, but many people that he considered friends didn't make it. Krakauer's "survivor's remorse" was heartbreaking. But then again, I'm always impressed with men that aren't afraid of their emotions. And even though Krakauer strikes me as the macho, mountain-climbing type, there were also some very touching parts of the book as well.

It will never pass for high art, but Into Thin Air is an amazingly great read and I highly recommend it. After finishing it, I Netflixed the TV movie version of it. I wasn't expecting much (heck, it was 90 minutes and the book is 300 pages!) and on it's own merits, it wasn't bad, but as most movie adaptations of books go, it just can't compare.
Posted by Dan at 12/12/2005 09:01:00 AM 1 comment:

As usual, I don't usually go for these online quiz things, but this one's clever. 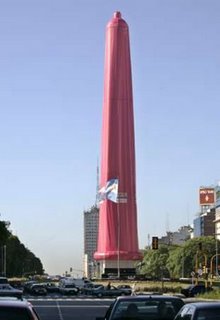 This is the Obelisk of Buenos Aires, Argentina--and look what they've done to it for World AIDS Day (which was actually yesterday.)

It really is too bad that AIDS has dropped off the radar for a lot of people. It's still killing people, it's still spreading. Bottom line--the drug cocktail didn't put an end to it.

The book that really made the AIDS epidemic real to me was Randy Shilts' And The Band Played On. While not the most unbiased piece of journalism ever written, it is a riveting read and definitely worth the time it takes to read it. I remember how negligent our government was at the time, in large part because the disease was killing the undesirable components of society. And don't even get me started on the criminal negligence of the nation's blood industry. How many hemophiliacs died needlessly because of them? Read it. It's a great book.