Well, to parapharse Dora the Explorer, "They did it! They did it! They did it! Screw them!" They've closed our neighborhood elementary school by a vote of 6-1 on the school board. This is despite all the input from the public and especially the Roosevelt PTA. It was almost as if from the beginning they decided they were going to close the two elementary schools and no matter what other options were offered, they weren't even going to consider them.

It's sad, it's aggravating and it's mostly just a great example of just how screwed up things are all across the country these days--because the education crisis is certainly not unique to Ames. But perhaps the most frustrating thing personally is that it marks the 3rd time in just over a year we've felt passionately about something and been on the losing side of the argument. The first was when we backed Howard Dean in the Democratic primaries--and what ended up being the impetus for us to move to Ames. The second was watching 51% of the country re-elect one of the most idiotic presidents in the history of our country. We worked our ass off for Kerry even though I would have done that for a purple turd running against Bush so it didn't have as much to do with Kerry as it did with Bush. And now this.

But the battle is just beginning. To start off with, parents in the community are appealing to the State Board of Education saying that the school board didn't follow proper procedure for closing the school. I think it's probably a long shot, but it's worth examining. We also have to work to keep the playground on the school grounds open as it's an anchor for the neighborhood. The last elementary school the Ames school board closed resulted in them fencing up the playground because they didn't want to keep up the insurance. Cheap bastards. First they close our school, now they want to take away our playground. Tell that to my 3-year old.

We went to what amounted to the "defeat party" on Friday night--quite on a whim--and met a whole bunch of cool people who are fighting mad and willing to do something about it. And it doesn't just stop with the school. It goes beyond the school board and extends into city business. It's all about smart growth. It's about re-investing in our downtown and our city rather than just building on the outskirts of our cities. I mean, you really have to look no further than 30 miles to the south to see what happens when you focus only on your suburbs and ignore your city. Des Moines is pretty much a shithole everywhere except in West Des Moines.

Cindy Bullens is the most played artist at my Audioscrobbler page this week. That feat was accomplished by the fact that I played the song "Freddy My Love" from Grease three times last week. It was in a dream I had while we were at Barb & Chip's so consquently, I ended up putting it in my iTunes.

Insanity all around me

I'm trying hard to keep a zen-like attitude, but everywhere I turn, there's insanity. Case in point #1--the Ames school district is trying like hell to close two elementary schools in town ostensibly because it's the only way to balance the budget. The superintendent recommended this to the school board a few weeks ago and the shit has pretty much hit the fan around our neighborhood because one of the schools on the chopping block is our neighborhood elementary school--Roosevelt Elementary. It's just a couple blocks from our house and is the anchor of the neighborhood. There are literally hundreds of kids from the neighborhood that walk to school everyday that would either have to be bussed or driven to school next fall if the superintendent and (sadly) what's looking like the majority of the school board has their way. It's just another example of our "if-it's-broke-don't-try-to-fix-it-instead-throw-it-away" society. There's little doubt in my mind that this is just a run-up to closing a couple more elementary schools in a 2-3 years and then saying that we don't have enough space for all the elementary school kids and we need to build a multi-million dollar school on the edge of town where no one can walk to school.

It mostly makes me sick because it's my neighborhood they're talking about, but it's also what I've taken to calling the Bush Mentality--that is "Let's lower taxes so much we can't afford to fund anything and then scratch our heads wondering 'what the hell happened?' when there's no money to fund the schools." I know that the parents in our neighborhood would be more than happy to see their property taxes rise to keep the schools open, but the time for that debate has long since passed. And then school board members say idiotic things like "I don't feel any remorse for any of those parents" it makes me wonder if they remember who they were elected to represent.

So we'll see--they discuss the budget tonight and vote later this week. We'll know by the end of the week whether Anna will be going to Roosevelt or if she'll be bussed across town. Or sent to a private school or even home schooled. Public education is such a clusterfuck right now and even though I'd love to pin all the blame on Bush and his "All-Children-Left-Behind" idiocy, Bush is too much of an idiot to have screwed public education up all on his own. Sadly, public education has been crumbling for decades.

And case in point #2--the insanity of undoing the Constitution in the Senate by Republicans. It's a prime example of a party looking for supreme power. I never thought I'd witness this kind of insanity in the United States.

Another frightening vision of the future

I read this article and realize that Mr. McNamara must have a lot of ghosts haunting him. I think he's a man that's really learned a few life lessons and is going to try to tell as many people as possible.

I remember being a kid and having a very real fear that some night I would wake up and the civil defense sirens would be going off and we'd be minutes from a nuclear holocaust. I remember my dad talking about how we would have to stay in the basement for a long time if that ever happened. One instance that I vividly recall from my childhood is the time we'd been gone on vacation and suddenly, at 5:20PM on a bright, sunny day, the civil defense sirens started blaring. My dad said--"Turn on the news. Let's see if they're blowing up the world." So yeah, it was a really real fear for me as a youth.

When the Soviet Union fell, I felt like the chance of nuclear war was pretty much over. But in this new era of rather unconventional warfare, all that's old is new again.

But if you want scary, this part of the article really kind of freaked me out:

Indeed, according to former Soviet military leaders, at the height of the crisis, Soviet forces in Cuba possessed 162 nuclear warheads, including at least 90 tactical warheads. At about the same time, Cuban President Fidel Castro asked the Soviet ambassador to Cuba to send a cable to Soviet Premier Nikita Khrushchev stating that Castro urged him to counter a U.S. attack with a nuclear response. Clearly, there was a high risk that in the face of a U.S. attack, which many in the U.S. government were prepared to recommend to President Kennedy, the Soviet forces in Cuba would have decided to use their nuclear weapons rather than lose them. Only a few years ago did we learn that the four Soviet submarines trailing the U.S. Naval vessels near Cuba each carried torpedoes with nuclear warheads. Each of the sub commanders had the authority to launch his torpedoes. The situation was even more frightening because, as the lead commander recounted to me, the subs were out of communication with their Soviet bases, and they continued their patrols for four days after Khrushchev announced the withdrawal of the missiles from Cuba.

...but there are TWO ZOMBIE MOVIES coming out this summer.

I am so at both of these, no matter how bad they might be.

George A. Romero's Land of the Dead

This weekend, we went to St. Peter, MN to see our friends Barb & Chip. It's suprisingly not a really long drive and all in all it was quite relaxing. I watched "I Love The 90s" on VH1 till I was sick to my stomach (funny thing--I kept coming back for more, the glutton that I am) and Anna got to ride horses (which was probably the biggest reason for going.) 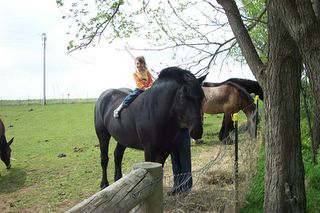 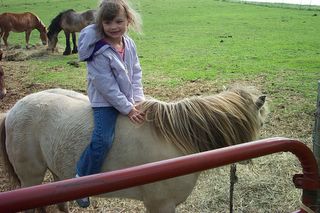 I have to admit it was a bit unnerving because Chip just let her run around the pasture where the horses were (he kept a very close eye on her and scooped her up any time she got too crazy) but she had a great time. So begins her love affair with horses--something I think every girl probably has to do at some time or another. I mean, even Lisa Simpson loved horses.

I also discovered the joys of VH1 Classic which *gasp* actually showed videos! It was a hoot seeing the video to the Go-Go's "Head Over Heels" and Joe Jackson's "Steppin' Out" just like it was 1984 all over again! This morning, I was all set to get a dish for our house, but after a day long diet of VH1, I've decided against it, as I'd probably never read another book again and just end up ignoring parental duties and feeling like a big old slug anyhow.

All in all, a fun weekend and a lot more relaxing than I initially thought it might be.

My bookmarks have vanished from Firefox. And not for the first time. *sigh* Guess I'll spend tonight trying to reconstruct them.
Posted by Dan at 5/08/2005 11:01:00 PM No comments: