I'm getting pretty close to finishing up this year's installment of my summer upbeat mixes. Once I get them finished, I'll post the track listing and a brief comment about each. (for a look at last year's, click here and here.) I laid down some pretty stringent rules this year (some of which I subsequently broke) and it's been pretty fun. I discovered some new music, rediscovered some not-so-new music which is always fun and overall had a great time. Now it's time to get them onto CDs and distribute them to friends and family--which is perhaps the most fun part of all.
Posted by Dan at 6/30/2005 07:16:00 AM 1 comment:

New blog in the blogroll

I know, I haven't updated the blogroll in forever, but I found EW's Popwatch blog today and thought it deserved to be added to the list of blogs I travel to pretty much daily (or even better yet, keep up with via Bloglines.) Since I'm pretty much a slave to pop culture, it looks like it'll be right up my alley. Definitely worth a look-see.
Posted by Dan at 6/28/2005 09:24:00 PM No comments:

Tonight Heidi and Anna came to pick me up from work and apparently, Anna's new favorite song is Bronski Beat's "Smalltown Boy." She calls it "that xylophone song"--apparently from the instrumental bridge toward the middle of the song where they're all "Cry boy cry!" She even sings along with the "run away, turn away, run away, turn away" part. It's super cute. And once again, the paternity tests can be stopped because that's proof positive she's my daughter. What a great 3 year old I have.

And speaking of Bronski Beat, I'm reminded of that Bronski Beat/Madonna mash-up "Beautiful Smalltown Stranger." Not the greatest mash-up ever, but still a pretty capable one.
Posted by Dan at 6/28/2005 09:12:00 PM No comments:

Last weekend, I went to my grandparents' for Father's Day. I don't get up to see my grandparents (they're my mom's parents) as much as I probably should, and they really are getting on in years. Anyway, while I was there, I asked my grandma if I could have a coffee cup that I always remember from my years as a kid. I always wanted to drink out of it because I just thought it was the coolest damn cup in the universe. It was from the Smithsonian Institution (my grandparents traveled all over the place) and had an artist's rendition of a Tyrannosaurus on it. 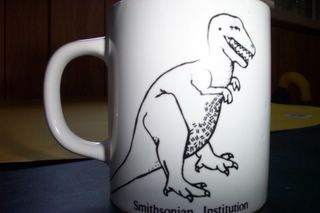 The coolest thing about this cup now is that Tyrannosaurus will never be depicted like that again. Dragging its tail? I don't think so. Useless front appendages? Yeah, strike that. Scientists have learned a lot about Tyrannosaurus and by the time Sue came along at the Field Museum a lot had changed in the popular depiction of Tyrannosaurus--and you can see this vividly on my Sue coffee cup (Photoshopped to make a point.)

But perhaps the most amazing thing about these two cups is how much bigger the Sue cup is than the Smithsonian cup. I guess we just drink that much more coffee. *shrug* 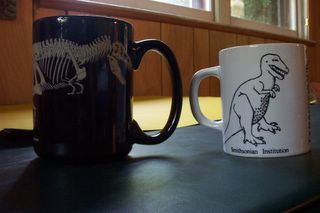 Via Metafilter, scientists have created zombie dogs. Because everyone here knows there's no way I can resist a good zombie story.
Posted by Dan at 6/27/2005 11:43:00 PM No comments:

Has it really been 25 years?

Ah, the days of my youth spent plunking quarters into Pac-Man machines. Misspent? Probably, but I wouldn't trade it for the world. The days at the roller skating rink playing Donkey Kong, the time spent in the back of the local Hy-Vee playing Frogger. It was those little things that make up the fabric of me.

Thank goodness you can play Pac-Man without having to pay 25 cents (just now realizing how much I miss the "cents" key on the computer keyboard.) And, of course, you can find out everything you ever wanted to know about Pac-Man courtesy of this site.

And it even mentions the sucky Atari port of Pac-Man, which we played until our eyes fell out of our skull, even though, yeah, it pretty much sucked.
Posted by Dan at 6/16/2005 12:23:00 PM No comments:

And speaking of rainbows...

Get a load of this beautiful rainbow that appeared tonight after a rainstorm. 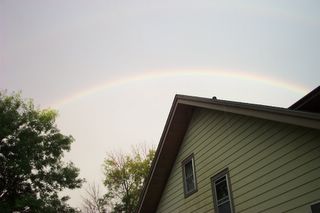 The picture doesn't even begin to do it justice. It's the most brilliant rainbow I've ever seen in my life.

Yesterday Heidi, Wendy and Anna all went to Des Moines for Capitol City Pride a/k/a Gay Pride Iowa 2005. I had to work and was really bummed that I couldn't go. From the sounds of it, it was a great time, although it was hot and Heidi ended up getting sunburned. They had a parade that started at the State Capitol (which Anna told us was her palace) and ended up in Simon Estes Amphitheater. There were booths set up by various organizations including our bank, WellsFargo, which made us very happy. Anna was just blown away by the ballons that arched across the street making a big rainbow and the "princesses" that she saw--she told me that she even saw Cher! She wore her rainbow sun dress and her Dorothy ruby slippers which Heidi mentioned got a lot of comments from guys that were there. She loved getting candy thrown by people in the parade and walking around just soaking it up. When it came time to leave, it was drama of the first degree and many tears were shed.

Gay rights is an issue that Heidi and I have really adopted, especially since this nonsense about actually writing discrimination into the Constitution of the United States has begun to gain traction--however slight. It's my hope that someday we'll look back on these laws that states have passed banning gay marriage and look at it as we do the 1950's when it was perfectly ok to discriminate against an African-American. Hopefully, we'll say "what the hell were we thinking?" and repeal all of them.

We're not there yet--not by a long shot--but baby steps is the way to go.

And to celebrate Pride Month, iTunes has a special iTunes Essential Playlist. I have probably 90% of the songs on here in one form or another. Definitely worth a look and a listen.
Posted by Dan at 6/13/2005 10:45:00 PM No comments:

Gack! It's been forever since I've updated this thing. And this won't be anything substantial, so my legions of fans (all 4 of you) will just have to be patient till I can get some time to post a proper entry. In the meantime, here's what's going on:
So back later with more intriguing stuff (ok, I can't promise it'll be intriguing.)
Posted by Dan at 6/10/2005 11:19:00 AM No comments: