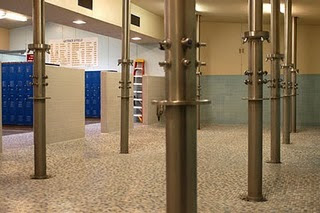 In part as a response to this post and because Heidi is really feeling the need to get moving as well, we coughed up the cash for Ames Racquet & Fitness - probably the most popular of several gym/fitness center type places here in Ames. There are three locations in town - one of which being a 24 hour place - and I get a pretty decent discount through work, plus they reimburse me 9 bucks a month if I go 8 times in a month. So it's win-win, right? Although all I can think of is the time when Chandler wanted to quit the gym on Friends, I feel like it'll be a net positive, right?

I've gone a couple times now and it's all still shiny and new but what I'm really trying to do is establish the habit and pattern. I've established the habit and pattern before, only to smash it to pieces, but life is a series of successes and failures. As the old standard goes, you pick yourself up, dust yourself off and start all over again.

Heidi is all about showering at the gym, but in the couple times I've been there, I've come home and showered. Why, you ask? Because there's no damn privacy at the gym, that's why! Heidi was dumbstruck tonight when I explained to her that in the men's locker room, there is a small room with nozzles sticking out of the wall vs. the stalls with privacy curtains for the showers in the women's locker room. Why is there this inequity? I don't understand it? The shower heads are not even separated enough to keep you from standing in a total stranger's personal space!

I have never understood this, even though it has been a common occurrence throughout my life. It was that way in elementary, junior high and high school gym class. It was that way (most scarringly) my first couple years of college in my dorm. I remember showering at the weirdest times of the day so I didn't have to be in there with other people. It was such a shock that one time Jeff and his girlfriend at the time came over and Jeff, upon seeing the shocking lack of privacy in the showers, forced his girlfriend to come into the men's room to see. When I transferred to Iowa, I was lucky enough to live in a dorm where the showers had stalls - walls and curtains and the whole nine yards. Yeah, sometimes you had to wait for them, but you didn't have to stand there, naked as a jaybird in the middle of the restroom, waiting for a shower to open up, only to have to go stand next to someone that you might see at lunch later in the day. It was just all kinds of awkward.

What blows my mind is that the privacy is reserved for women who have so much more of a communal bathroom experience than men do. Guys know what I'm talking about - we all know the guy that doesn't know the rules of men's room etiquette. From what Heidi's told me, women talk to each other from inside stalls. What a completely foreign experience that must be.

I can't decide if the problem is with society or with me. I'll be the first to admit that even now, I have a terrible body image. I look in the mirror sometimes and wonder when I'll stop going through my awkward phase. The thing I guess I need to tell myself is that no one is looking and no one - no one that matters anyway - is judging.

Seconded. Also, can I call "weird" on the guys who hang out in locker rooms without anything on for no reason?

Also, the movie CEDAR RAPIDS has a great scene with Ed Helms trying to have a normal conversation with a naked dude in the locker room.

Funny - my wife and I were talking about this a few days ago. Same situation, women's locker room has individual showers with curtains and the men's is the open, communal showers.

It's never bothered me to much, so I shower at the gym after working out. There were a couple of situations that became a little uncomfortable; such as showering with the husband and two sons of a women I work with.

Anon - I would agree wholeheartedly with the uncomfortableness of showering with the husband of the woman you work with. I tend to feel a bit "exposed" when I see people I work with at the pool.

Puritans! LOL it is just a shower... use it get dressed and go... the only thing freaky is your imagination!

Weird!! You're a man and your embarrassed to shower with other naked men? What are you frightened about?

Frankly, it's not very manly to be overly concerned about privacy. We keep certain things private more to protect women's sensibilities, not our own.

It really just seems like you have some major insecurities about yourself if you're this averse to showering in view of someone else...

No offense but i like this open shower concept. It's very masculine! And what's wrong in watching some eye candies for a while!