A Land of Ash/Grants Pass

While I was on vacation last month, I finished off a couple of post-apocalyptic fiction anthologies. Even though it seems counterintuitive, post-apocalyptic fiction is really great fun to read when it's done right. I loved Stephen King's The Stand, but did not care one bit for Cormac McCarthy's The Road (the apocalypse was never so boring.) The two anthologies I read were A Land of Ash, which consists of stories told by survivors of the eruption of the Yellowstone Caldera and Grants Pass, which found those immune to three super-plagues trying to figure out how to get to Grants Pass, Oregon based on the blog entry of a young girl who wrote "When the end of the world comes, meet me at Grants Pass." 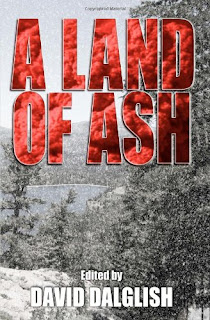 The tag line for A Land of Ash reads: The Yellowstone Caldera has erupted once every 600,000 years. We’re 40,000 years overdue. It was famously (and expensively) done in Roland Emmerich's 2012, but if you believe the stories in this anthology, the movie would have been over after the eruption. All but one of the stories take place in the United States, which sees massive devastation from the ash-cloud that results from the eruption. As with most anthologies, the quality of the stories varies wildly, but there are some real keepers in there. "Shelter" tells a heartbreaking story of a father and daughter who survived the eruption inside their house. He has sealed up his house against the ash-cloud, only to see his defenses gradually breached. And in "Toward the Storm" a woman travels west toward Yellowstone, in contrast to the thousands who traveled toward the East coast of the U.S. to escape it. Her faith in God is what sustains her although that faith is about to be tested.

A Land of Ash was an incredibly quick read, and it's one I could see myself reading again. There were only a couple of dud stories and I find myself intrigued by the fact that these were all stories of regular people and how they would behave in the days and months after a massive volcanic eruption in North America. 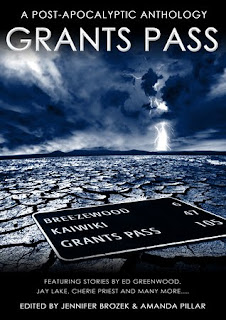 Grants Pass was mentioned in several of the Goodreads reviews of A Land of Ash so I picked it up from the B&N Nook store for $4.95. As I mentioned previously, Grants Pass is the place in Oregon that everyone is trying to get to after a combination of Ebola, superflu and bubonic plague wipe out 99.99% of the human population. To add insult to injury, "the big one" finally hits southern California - as if global epidemics weren't bad enough. In stark contrast to A Land of Ash, most of the stories in Grants Pass were international. This gave the anthology a bit of a different flavor. It really did feel like a global apocalypse. The eruption of Yellowstone would have global ramifications, but it would have nothing on the bioterrorism that wiped out the world in Grants Pass. On the whole, I didn't enjoy this as much as A Land of Ash. In many ways, it reminded me of the Choose-Your-Own-Adventure books without any of the choosing. Many were chilling and scary - the scariest ones accenting the isolation that an end of the world scenario such as this would bring. But overall, I kind of felt like I was always waiting for "how are they going to work Grants Pass into this?" Sometimes it was convincing, other times it felt very shoehorned in. It also suffered from more proofreading errors than A Land of Ash which is always a pet peeve of mine. So it was a little bit more of a mixed bag than A Land of Ash. Still, it was worth the read because it too was a really fast read.

I think one of my favorite things about the rise of ebooks is that books like these are starting to see the light when they wouldn't have otherwise. I can't see established publishing houses taking chances on books like these, but they still deserve to be out there. I recommend them both to fans of PAF, but I definitely enjoyed A Land of Ash more.