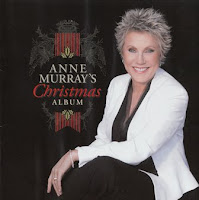 It's time for a Christmas set from one of my guiltiest of all guilty pleasures.

Everyone has to get into the Christmas act, and while surfing around Amazon.com the other day, I came across yet ANOTHER Anne Murray Christmas album. Turns out this is her 7th holiday collection, and actually, it's a bit of a cheat. Fifteen tracks, but ten of them are collected from her previous six Christmas albums. That leaves five new tracks.

This proves to be a tactical error for Anne Murray. While she has always had a fantastic voice, and the voice that sings these new songs is unmistakeably Anne Murray, the new songs suffer the same fate as a lot of those duets on her Duets: Friends & Legends. While good, you can tell that Anne Murray does not have quite the vocal chops she had in the past. This is certainly not her fault, but when you listen to her newly recorded version of "Rockin' Around The Christmas Tree" and then compare it to "Winter Wonderland" which has been around forever, you can't help but feel like you're listening to your grandmother sing "Rockin' Around The Christmas Tree." Again, that is not Anne's fault - it's just what happens to your voice as it ages. You become a bit of a warbler.

But Anne is such a class act, we'll forgive her for that. We'll even forgive her the frosted hair and the gradual morph into Katherine Chancellor from The Young & The Restless.

It's funny...while I don't like all of Dolly and Kenny on a track-by-track basis, as a whole it's a brilliant Christmas album. Anne, well, does okay.

I love Anne. The track Baby It's cold Outside with Michael Bubblé is fantastic and her voice never sounded better there. Also the jazzy set with Diana Krall is first rate. Anne is the Mistress of Christmas and please...she doesn't look like that old Y&R hag. She looks fantastic! I am glad she is still recording. She is the best vocalist to ever grace this planet when she was in her prime and I still enjoy her new recordings. You go Anne keep rocking my world

I actually have an Anne Murray Christmas album! I didn't realise their were 6 more to collect. I think (as with Amy Grant) one will suffice for me. It's quite good though.