This Christmas, we decided that our big present to ourselves would be one of those Roku boxes that allows you to stream Netflix movies directly to your TV. For an investement of a hundred bucks (as well as the monthly subscription to Netflix), movies and other entertainment can be streamed over the wireless network. Watch as much as you want, whenever you want. Truth be told, it was done partially in an attempt to hold off getting cable or satellite. I really don't want to get cable because that is another 50 bucks a month AT LEAST and then I will feel obligated to watch TV.

One of the pleasant surprises of the Netflix box is the discovery that a whole slew of Inspector cartoons from the 60s. The Inspector was kind of a spin-off of the Pink Panther cartoons and I remember them primarily from seeing them in the theater as a kid. On Saturday afternoons, you could pay a dollar to get in and then it was nothing but wall-to-wall cartoons for the next 3 hours. The Pink Panther and The Inspector were among the most frequently played. 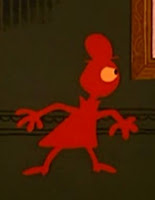 Anyway, one of the first ones that I watched on the Netflix box was one of the ones I remember most vividly from my childhood. It was called "Cirrhosis of the Louvre" and involved a criminal named The Blotch, except the Inspector could only refer to him as "the bleutch" due to his thick French accent. The Blotch is basically an ink stain that can morph into just about any shape or form he wants. In fact, the first time you see him, the Inspector and his sergeant are in the Louvre (after The Blotch sent a letter to police vowing to steal every piece of art in the museum) and they step over a red bit of paint on the floor. The Inspector says to Sergeant Deux-Deux, "Look, someone left that bleutch of paint on the floor" only to have it gain human form as soon as they walk past it.

Naturally, the entire Louvre Museum is stolen on the Inspector's watch. But not before having The Blotch paint a likeness of himself on the back of the Inspector, leading to him being shot at and hit over the head with a club on several occasions.

Anna is loving the Pink Panther as well - having watched about 30 episodes after school tonight! We were marveling at how frequently people are depicted as being heavy smokers or drunk off their ass. What a difference 40 years makes! Now, we're all too sexy for our cigarettes.

I'm actually thinking of getting rid of cable! You may be better off renting DVDs and buying your favorite shows on DVD and watching them at your leisure. On cable sometimes it's the same bad uninteresting (to me) show repeated over and over. It's always a marathon of the same sucky show.

That is kind of my take on cable. We always think we want the 500 channel thing, but then we go visit my parents and we find out that it really is 500 channels and nothing on! So far, the Netflix box has really seemed to be worth the money for the reasons you mentioned.