Confessions on a Piano 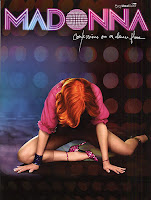 Well, it was supposed to be a Christmas present to me (one that I was going to get early anyway), but today Anna gave me...the sheet music for Confessions on a Dance Floor! Apparently, time was going by so slowly for her, and she just was peeing her pants waiting to give it to me.

Every single song from the album is in there, and of course we started with "Hung Up." I was looking at it and trying to play it and having a bit of a difficult time. The straight forward piano solo of a song never sounds like the record, obviously. It's lacking the drums and the vocals and well, everything else. But once I figured out that trickly 16th note triplet was a part of the ABBA sample, well, from then on, it was a breeze. Our goal is for me to get the accompaniment part down so that by the time we have our big old Christmas get together on the 20th, Anna can play the "time goes by...so slowly" part.

A big reason for her interest in giving me this particular present is that she has just started taking piano lessons. She is amazing me with her ability so far, and that's not just parental pride. She started at the beginning of November and I am very impressed with her ability to hear rhythm and notes and her determination to see it through to the end. She is on her way to being able to read music pretty well (most of the stuff she's playing is not actually on a staff but rather notes with the names on them.) She is making her papa proud.

But what made me prouder than her perseverence at her piano lesson was her response tonight as I was randomly singing "Get Together." To my "do you believe I can make you feel better" she responded with "too much confusion, come on over here."

i didn't know you played piano! We must team up - we can be billy joel and elton john!> how exciting that anna is doing so well. I did teach piano for a while but i'm not sure i had the patience for it so gave it up!! Often sheet music does not reflect the melody people know so well (particularly on dance songs, and strangely on broadway songs too) but i often improvise to get the whole thing down. My current piano jam is the tune to family guy. just love it. Oh and a nice slowed down version of We R One of course :) I fully expect a nice video upload of your family endeavours!

I didn't know you could play either! That's awesome. A father / daughter video concert is a must! Get to working on that. :)

Awwww! The apple doesn't fall too far from the tree, it appears. And how cool is it that she understands your passion for certain things? You truly are blessed.