Last night I was out and about doing some last minute shopping for stuff for Christmas stockings, photocopying the Christmas letter and getting a few other odds and ends. It was a night in which not only was it helpful to get your zen on, it was essential. Everyone and their brother was out last night, trying to score bargains, etc. an d parking at most places was at a premium. But rather than be irritated with it, I just went with the flow. You really had no other choice that didn't result in spontaneous human combustion. 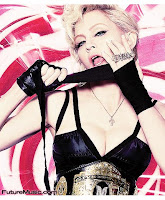 Anyway, during this whole thing, I was listening to Madonna (I know, shocking.) While I was in the car, it was Hard Candy. While I was walking around the stores, it was American Life. And it was during this time period that I figured out the biggest problem with Hard Candy (and yes, I know this blog has been filled with musings on why Hard Candy ultimately disappointed. Deal.) Hard Candy is kind of like the one night stand that is all titillating and naughty and seems like a good 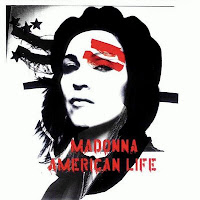 idea at the time. Only after it's all over do you discover that all you have left is a bad taste in your mouth and an STD. American Life, on the other hand, is the marriage. It is moody and joyful and emotional and sometimes makes you want to run screaming from the room because it drives you so fucking crazy. But it's the real deal, it's the one that makes you feel alive. It's the authentic one, the one worth your time and energy. Years later, it still resonates.

I haven't heard it described in that way before, but yeah, "Spanish Lesson" is definitely the STD of "Hard Candy". I'm glad you were able to find a little bit of revelation in the midst of chaos. Have a wonderful holiday, and we'll see you on the flip side.

An STD?! HAHAHAHA. That is quite an interesting (and - probably - quite correct!) way of putting things.

As for American Life; it's still my third favourite Madonna album of all time for the very reasons you've mentioned. It's just so VERY real.

John - actually, I think that "Incredible" is the STD of Hard Candy. ;)

Adem - American Life is probably my 3rd favorite album as well - after Confessions and Erotica. I so wish she'd go back to writing about her life.

Incredible is the NSU (non-specific urethritis!) of the album, yes. If you don't take care of it, it gets worse over time! Which is sad because that weird racing middle eightish bit is okay.

American Life is like a secret. Many people don't even know about Nothing Fails!

Much thanks to you for giving such significant data, and a debt of gratitude is for sharing this Business Promotion system.