I was bound and determined to NOT let July slip by without updating this blog. I think summer breeds blog-breaks (cue a "we were on a break!!" joke.) I have no real excuse for not blogging - I have had several topics I've seriously wanted to blog, some that I really need to blog, but for the most part, I just have not been moved to do so. Part of it is I have been caught up in my Netflix these days. We have had some very rapid turnarounds on Netflix these days which is good because it makes up for the times that you get one and it sits around for a month and you've just gotten to pay 25 dollars for the privilege of it gathering dust on your TV.

We're also getting ready for a garage sale this weekend and the act of getting rid of the JUNK in this house has been so liberating. I threw out so much stuff yesterday while I was cleaning out my office, it was unreal. We had so much trash on the curb for the garbageman this morning - Al Gore would have just shaken his head and walked away. I must admit to feeling a bit bad about all the trash, but what was I supposed to do? As a blogger friend pointed out to me, my soul is undoubtedly lighter for it and I will never miss any of it.

I have also been undertaking a "ceiling project" in my office. My ceiling is extremely pourous and also very ugly, so when I first moved my computer and all the accoutrements into this room, I started tacking up various pictures and things on it - mostly things that Anna has drawn for me and pictures that have a lot of meaning for me. My ultimate goal was to cover the whole thing and have it be an always changing reflection of me - who I am, where I've been and where I'm going. Well, I ran out of staples at one point and was too lazy to go and check with Heidi to see if she had any. And then there was ***insert excuse here***. Well no more. I'm trying to get a picture ready for what I've done, but it's not ready yet. In the meantime, I'll leave you with this teaser. 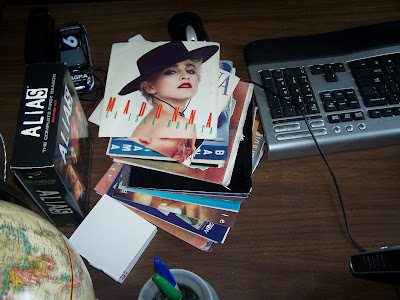