This sweater is old and faded

I was going through some old photos the other night - we were a total fail in making a baby book for Anna and as soon as we get done doing the scrapbook of our vacation from last year, we're going to try to do the same thing for Anna's infancy. Anyway, I found a bunch of pictures from Anna's first Christmas. This one blew my mind. 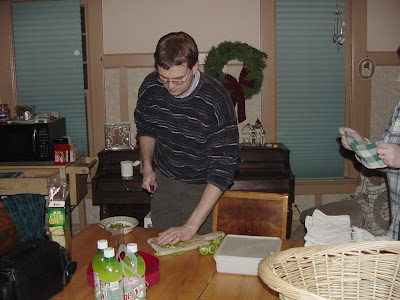 Every now and then you see a picture of yourself that just makes you think "Damn, when did I get old?" I look at that picture now and can't even remember having that much hair that was NOT gray. But from the some-things-never-change file, I still can dice green peppers like no one else.

But it wasn't even my relative youthfulness and the actual presence of color in my hair that got me - it was that sweater. Man, I LOVED that sweater. I remember that I got it at Kohl's - it was on a mannequin right at the front of the men's department. I had had my eye on it for a while but never felt like I could afford it. Then magically, one weekend, the sweaters were all on sale and I decided I wanted it. Sadly, they didn't have it in my size except for the one on the mannequin. So I had one of the employees take it off the mannequin. They probably were all "what the hell" but hey, they were making a sale.

I'm pretty sure I still have that sweater - I think it's at the bottom of the cedar chest. I don't really wear sweaters as much anymore and I know that it's not in the best of shape but I think I might have to figure out a way to resurrect it next winter.

But that doesn't mean I'm going to dye my hair. I like the gray just fine.

I always feel guilty asking employees to take clothes off the mannequin because I worry after the employee goes to all the trouble that I won't actually like the item of clothing after I try it on. Sometimes I just strip the mannequin myself. If I can't find my size, I always check the mannequin, though.

i personally think grey is v distinguished. And never feel guilty asking them to strip a mannequin! They should have more clothes in our sizes on the rack!!!!