Still trying to save the princess 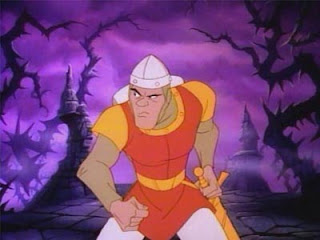 After months of eyeballing it, today I finally purchased Dragon's Lair for the iPod Touch. For those that don't know, Dragon's Lair is a Don Bluth animated video game from 1983 in which you control the movements of Dirk the Daring through an enchanted castle in an attempt to rescue a princess from the clutches of an evil dragon. When I was a kid, this was the creme de la creme of arcade games. Instead of herky-jerky graphics, it was pretty much a full fledged cartoon that responded to your controls. What could be better?

In all honesty, a lot. I think most of the times I played Dragon's Lair as a kid, the game lasted an average of 1.3 minutes. This was especially distressing because instead of costing a single quarter, it was 50 cents per play which ate up your Adventureland pocket money twice as fast. I could never figure it out. The technology drew you in, but control of the character was so different from every other arcade game we blew our money on that it never gave me a good game playing experience. Mostly, I walked away from it with a bad taste in my mouth and feeling cheated out of my money.

After my early 80s experiences, I never really thought much about Dragon's Lair until I bought a PC version of the game in the mid-90s. It was only then that I really figured out how to control the knight and even then, it was after massive amounts of fail. I managed to maneuver Dirk past all the main obstacles and make it all the way to the dragon's lair, but try as I might, I could never defeat the dragon, and since 90s technology is pretty much incompatible with late 2000s technology, I figured I had missed my chance at ever beating the game. But as is so often the case these days, Apple saved the day.

I spent quite a while this afternoon playing Dragon's Lair on the iPad. Even though it's an iPod app, it looks pretty good on the iPad. I actually can't imagine playing it on something as small as an iPhone, but hey, any port in a storm. Gameplay is just like I remember it except instead of a joystick, there's arrows and a sword button on the screen. In a turn of events that would have made my quarters last a hell of a lot longer as a kid, the controls light up in the direction you're supposed to move Dirk just before you need to do so. This kind of ticked me off at first because after all I'm way too cool to need help! But after a few rounds of getting my ass kicked even WITH the controls that light up, I rethought my position.

Could it get repetitive? Oh sure. Is it frustrating as all get out in some places? Definitely. But it still takes me back to days when my biggest problem was running through my allowance in 15 minutes in the back of Hy-Vee plugging quarters into video games. And the best thing of all? The app is only 99 cents. That's right - for less than the price of a cup of coffee, you too could be playing Dragon's Lair.

Oh, yeah, except you have to have that pesky Apple technology which costs decidedly MORE than the price of the most expensive cup of coffee.
Posted by Dan at 5/22/2010 05:27:00 PM

MAN this game was hard. In fact, I would say your 1.3 minutes average is actually too kind. ;-)