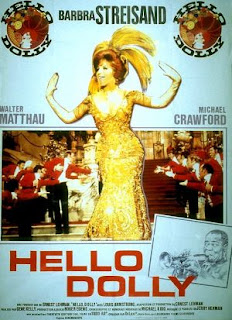 Because my brain works this way, I had a song from the movie version of the musical Hello, Dolly! stuck in my head the other night. It was the opening number and not "I Put My Hand In" which is the opening song in the show and only hinted at in the movie version. Rather, it was a song written for the movie (and, let's be honest, probably for Barbra Streisand) "Just Leave Everything To Me." I don't know how it got stuck in my head, although my suspicion is that someone at work said "leave everything to me" and well, there you go. Instant earworm if you live with my brain.

20 years ago, I had a brief love affair with the movie Hello, Dolly! One spring break, while the rest of my classmates were probably on South Padre Island or somewhere warm, I was back at home inverting my biological clock by staying up all night working on schoolwork and watching movies. I had made it a goal to watch as many of Streisand's movies as I could. I had read stories about how Hello, Dolly! effectively killed off the big budget Hollywood musical and was eager to see whether I agreed with this assessment. I wasn't really very familiar with much of the story despite having seen a community theater production of it when I was in high school. Naturally, I knew the title song (who the hell doesn't?) but beyond that nothing. Truth be told, it's not a horrible film, but it is a bit of a lumbering dinosaur. There are a lot of things wrong with it, not the least of which is that Streisand, who was 27 at the time, was WAY too young for the role of Dolly Levi. Sure, she sings the hell out of the songs, but she's supposed to be a widow - and an Irish widow at that! But even so, the songs are definitely old-school musical - very cheesy and complete with elaborate choreography and larger than life sets. Witness:

Anyway, having "Just Leave Everything To Me" stuck in my head prompted me to go read the Wikipedia article on the film, as I recall from other things I've read that Barbra Streisand and Walter Matthau fought like cats and dogs during the shoot. Because it's the nature of the beast, I clicked on links for other members of the cast. Besides Streisand and Matthau, there's a pre-Phantom of the Opera Michael Crawford as Cornelius Hackl and Danny Lockin as Barnaby Tucker - two employees of Walter Matthau's Horace Vandergelder who get wrapped up into Dolly's scheming. As I mentioned, I knew that Michael Crawford went on to better things, but what about his counterpart, Danny Lockin? I clicked on his Wikipedia article and found it to be rather brief. And then, I read the final sentence. Lockin was tortured and murdered by Charles Hopkins on August 21, 1977 in Westminster, California. I'll be honest, my heart sank a little bit. 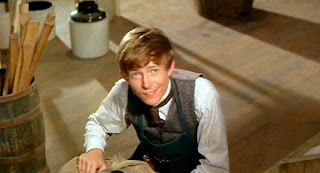 A little bit of investigation (ok, a lot of investigation) brought out the details, but at the same time, many of the details are left out. As it turns out, after appearing on The Gong Show in August of 1977, Lockin stopped at a bar on the way home and left with Charles Hopkins. According to this site, Hopkins called the police later that night to report a robbery. When the police arrived, they found Lockin's body, complete with 100 stab wounds. They also found what was likely the weapon used and a sex/torture magazine as well. Hopkins was charged with first degree murder. However, due to the fact that this evidence was found without a search warrant, none of it was admissible into the trial. Ultimately, Hopkins was found guilty of manslaughter and served four years, which if he did indeed do it with premeditation (and all signs point to yes), justice was NOT served in that case.

The unspoken subtext here is what is gets me. Clearly, the implication is that Lockin was gay, was leaving a gay bar and that this was a one night stand gone horribly wrong. Whether that's true or not, we may never truly know. Lockin was married and had a son, but as we all know, many married men eventually come out of the closet. This was especially common pre-Stonewall. For some reason, in my mind, the fact that this could be related to sexual orientation makes it even worse and more gut-wrenching. What gets me is that 34 years later, we still see this kind of thing happening, despite all our progress on gay rights and increasing acceptance of homosexuality in our society as a whole. A world with craigslist killers and hate-motivated crimes seems not all that different from the world in 1977. Watching Lockin's performances in Hello, Dolly!, he seemed like a very gentle person whose life was tragically cut short because of either idiot prejudice or self-loathing or something so fucked up we'll never know what the real motivation was.

So on a day when we memorialize people that have gone before us, I'd like to take this time to memorialize Lockin - although many people have done it much better than I ever could. It ripped at my gut to find out the fate he suffered. May this never happen again.
Posted by Dan at 5/30/2011 10:19:00 AM

Wow - what a tragic story Dan - so sad as I only watched this film for the first time at Christmas and thought he was a really good actor. Terrible tragedy and I completely agree that this looks like a homophobic crime.

I fell in love with Danny as a superb dancer when I was in my 20s. As a huge fan of Barbara S, I never would have known of Danny and Michael C if I hadn't seen that Dolly version. The performances were so charming and memorable. I'm so glad we fans have this movie on DVD to preserve these wonderful per formances! What a shame Danny was killed in such a horrible way, and that Hopkins only got a slight penalty for it. Thanks for your research and details so we could know what happened to Danny.