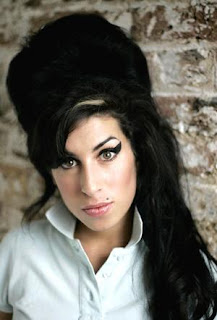 As a friend of mine said on Facebook today, "Today I learned that the internet is only for insensitive assholes. That's nice." While that's a bit of an overstatement, I have to say that I agree with the sentiment.

As we all know, Amy Winehouse met an untimely end at the age of 27 this afternoon. I was at the gym when I found out - actually I was in the locker room sweating from every pore in my body. While I had been on the treadmill, my Twitterfeed exploded with news of her death. There were tweets galore, many expressed sadness combined with a lack of surprise - understandable considering her very public struggles with substance abuse. But it didn't take long for the jokes about rehab to start and the judgmental "why should I feel sympathy for her" tweets and posts to start to pile up. Many people, rather than understanding that a 27 year old woman with family and loved ones - someone's daughter for Pete's sake - had died this afternoon, insisted on providing a snarky commentary based on their own presumptions and the version of her story that they created in their head. Perhaps their version of events may ultimately prove to be true. But at the time, it was completely inappropriate.

I was sickened by the jokes and snarky comments people made, by people's selfish behavior and refusal to understand that while Winehouse's death was certainly not surprising, it is no less tragic than if it had come as a complete surprise. A tremendous talent (admittedly, one that I didn't appreciate completely) was silenced and, as I said before, a woman not even 30 has had her life cut short.

I'll admit that back in 1994, when Kurt Cobain met a similar end, I was probably among the snarky ones. It didn't help that I was certainly no fan of Nirvana and I'm sure my take on it was "he was a junkie that deserved it." Well, I was 21 then, and with the benefit of 18 years, I'm ashamed of my behavior then, just like I'm sickened by those implying Winehouse "deserved" her fate or that somehow Winehouse's drug use made her death worth less or not worth mourning. To those people, I only have to remember the internet mantra..."too many anonymous internet assholes, not enough time." Only this time, they weren't so anonymous.

The world is full of pain and shit happens on a daily basis. Life is full of tragedies, large and small. It's how we deal with them that defines us. But more than that, it's how we feel for other people's tragedies, even if they don't seem that big to us that make us human. As I so frequently say, we just need to treat each other a little nicer. I wish I could say that in death, Amy Winehouse has received that respect that the dead deserve. Instead, it's been mostly vitriol and jokes that are simply, way too soon.

Her music will live on forever and there will certainly be a spike in interest. She won't be the first artist more celebrated after her death than while she was alive. Her short and tragic life is a reminder of the destructive effects of addiction and how, even though it shouldn't be, sometimes the addiction is stronger than the addict.
Posted by Dan at 7/23/2011 07:39:00 PM

Well said. iTunes has Black To Black at #1, but her impact will never be measured in sales. R.I.P.

May she find the peace in death that she was not able to find in life. I know that I'll be giving her album another listen - if that makes me a lemming, so be it.

About the Twitternets, I found the majority of assholes when I searched or looked at the trending topics. My peeps were way more respectful. And agreed, although not a huge surprise, it's very sad still. I was hoping she'd pull through and give us some more music. Mark Ronson's tweets were probably the saddest of all. I recall he likened her to a sister and a musical soul mate. RIP, Amy.