Well, for most everyone else, it's a three day weekend. The weather here in Iowa is going to be hotter than blue blazes but that will be a welcome change from the last few years of rain and 60 degree highs. Although our strategy of walking down the street to watch fireworks has seemed less and less smart since they moved the fireworks just slightly further away, we'll probably still do that as we don't want to fight traffic even if it IS just Ames traffic.

I said it's a three day weekend, but not for me. I work both Saturday and Sunday, but at least I have the 4th off, having worked Memorial Day this year. With the rate I've been blogging these days, it's likely I'll let the 4th go by with no fanfare here at all. To be honest, it's not my favorite holiday. I'm not one for standing out on the sidewalk in 95 degree heat while a parade full of uber-patriotic stuff passes by. There's usually a block party on our street that's pretty fun, but most of the time I don't like forced socialization and would rather do it on my own terms. And naturally, this weekend is going to be colored by Bingley's imminent death from lung cancer. So really, I'm not looking forward to the weekend very much.

I have been listening to the new Dolly Parton album Better Day which is full of positive messages for these not-so-great times (speaking generally, not specifically.) Overall, it's a much better album than Backwoods Barbie, and that album was no slouch either. The problem with it was that it felt so forced in so many places, like Dolly was consciously trying to figure out a way to get back on country radio. She may try to look like a 30 year old, but there's no denying that Dolly's 65 and there's no way that she is going to get played on country radio. This album blends the great success she found on her bluegrass albums with her attempt at a more mainstream country sound. 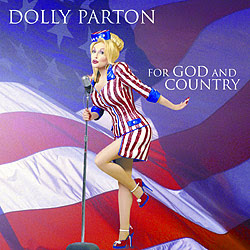 The combination of that and the upcoming 4th of July made me think of the only Dolly album I have never purchased - For God and Country, Dolly's response to the 9/11 attacks. It was an album full of traditional patriotic songs along with a few Dolly originals. By the time she got around to releasing it in 2003, the flag had been co-opted by the Bush administration and the radical right (although the radical right of that time looks damn tame compared to the radical right of today.) Anyway, I never bought it because it seemed like the soundtrack to the Republican National Convention, which I'm sure was not Dolly's intent. She never publicly speaks about her politics - she prefers to say she's "not political but very patriotic." However, I always assert that you can't have as big of a gay fan base as Dolly does and be too conservative. Anyway, even though I never bought it, I always did kind of like one song on it - "Red, White & Bluegrass."

Of course, there's a lot of things to that the U.S. does that are not things to be proud of, but I sometimes think that on the 4th of July, even someone as jaded as I am can be a little bit proud.

Happy three-day weekend everyone. I hope it's a good one. And buy the Dolly album - it's her best since probably Little Sparrow. When Dolly dies, I'll probably have to call in sick to work.
Posted by Dan at 7/01/2011 09:45:00 AM