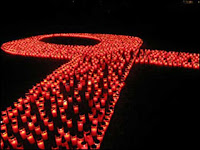 Today is World AIDS Day, as it has been every December 1st since 1987. In this day and age, it's easy to just let it go by as yet another day to be aware of something that seems to have long passed its peak. Nothing could be further from the truth. Every December 1st is another reminder to me of what, to me, is a modern day Black Death, only instead of killing in days, it takes much longer. In the early days of the epidemic, sometimes it was days from diagnosis to death, sometimes months, but rarely years. With the advent of anti-retrovirals, the life expectancy was increased. However, once protease inhibitors arrived on the scene in the mid 90's, it appeared that AIDS might become yet another chronic, yet manageable, health condition akin to hypertension or diabetes.

Boy, were we ever wrong about that.

HIV is one smart cookie. It mutates and becomes resistant. Fortunately, 2007 has been a great year for anti-HIV drugs, with new drug approvals coming faster than any year than I can remember. Two new drugs are completely novel - brand new in their class targeting HIV at a spot in its life cycle not previously exploited. This is exciting. Even though they are not cheap and not likely to get to places where they are desperately needed (i.e. sub-Saharan Africa) it is still a step in the right direction.

I've never known anyone personally that has died of AIDS, which is strange but not so much at the same time. AIDS is not nearly as prevalent in Iowa as it is in say New York City or Chicago or any other large urban area. It makes it hard to get involved with AIDS awareness as it is just not at the forefront of people's brains as it is in big cities or more populated states. But all the more reason to keep reminding people that it exists, even though you may not see it.

I will never forget that pharmacy that I drove past in the Lakeview District in Chicago that offered comprehensive HIV care to people. I always think about it when I'm frustrated with my own work and wonder where my true calling is. It keeps coming back to that. I'm in no position to quit my job, sell the house and transplant my family to Chicago, but maybe someday I will be. Certainly, it's something to aspire toward. I sometimes get frustrated with myself because I think to myself "What makes you think that the gay community would care one iota about what a straight guy thinks? And really, what do you know about what those with HIV are going through?" I suppose those are valid questions, but I guess where I come from, compassion is always welcome, no matter from where it originates and regardless of the on-the-job training that it might require. An article in JAMA last week (which I have not yet read, but want to) points to a re-emergence of the HIV/AIDS epidemic among gay men. What I expect to read is that those young gay men now were spared seeing their young, otherwise healthy friends die, which makes AIDS seem like something different than what it actually is.

As is my usual form on World AIDS Day, I will pimp what is perhaps my most favorite book regarding AIDS - Randy Shilts' And The Band Played On. If you're looking for real life horror, one need look no further than this book. If you haven't read it, read it now. If you've already read it, it is always worth a re-read. I wish I could buy a copy of this book for all my friends as it was the book that really brought the reality of HIV/AIDS home to me. I know I've told that story before, but I simply cannot tell it enough.

Another book that I highly recommend when looking back on the early days of AIDS when death came to young men (not just young men, but by an large, this was the largest group affected by it) is Andrew Holleran's Ground Zero which, while I was reading it, I'm sure many people mistook for a book about 9/11. It is basically a book of essays which may be true stories (or may not be) but they all concern AIDS in the early 80s when its diagnosis was a death sentence that would be carried out sooner rather than later. Holleran's book Grief, which he wrote recently, is kind of a view of that time period as well, but seen from the perspective of a survivor of the epidemic at the dawn of the 21st century. Holleran is a great author - I highly recommend all of his books.

But there is hope, that little sprite that flew out of Pandora's box after all the evils of the world had already escaped. And thank heavens for that.

According to The Ames Tribune, you shouldn't have to move to Chicago to get involved with HIV/AIDS work: HIV and AIDS are an issue in Mid-Iowa