And so this was Christmas

So Christmas is over for another year - well, it will be in a couple hours anyway. I think we had a pretty good one overall. Even though I was very oddly tired for a lot of the 4 days I had off, I feel pretty good tonight and I think I'm ready for a run of three evenings before another 4 days off.

Predictably, we woke up before 7AM today as Anna was ready to go investigate what Santa had brought her. She made out like a bandit - I don't recall ever having such loot at Christmas time. But as I've pointed out before, our childhoods are not really comparable because I was not an only child. Anyway, she got lots of good stuff - some fun toys and more Littlest Pet Shop stuff which she loves. She is still in awe over Butterscotch aka Spirit the FurReal pony that Jeff (her godfather) and Caryle purchased for her this year. Anything we could have gotten her is pretty much chopped liver next to that. But Heidi's going to blog Butterscotch so I wouldn't dare to steal her thunder although I will say that Anna sleeps with the head of the horse right next to her bed, which is just a little too Godfather for me. (Which just reminds me of this, which I am SO getting when I have $45 just sitting around burning a hole in my pocket.)

Santa also brought an iPod stage for Anna since we seem to be carting the one we have up and down the stairs all the time. It seriously needs GPS tracking on it as I can never find it. The only problem is that the one Anna got doesn't work. The volume goes up and down. It cuts out randomly during songs. We have the receipt and all the pieces, but how does one go about exchanging a present that is supposed to be from Santa? Anna is one smart cookie and is not easily fooled, but she fell hook, line and sinker for my story that I e-mailed the elves and found out we needed to take it to Kohl's to get it fixed. Not sure how well that will play in even a year or two, but thank God it seemed to work this year.

One of the best things I got this year was something that was from Anna, who always wants to get me "something scary" for my shelf. Usually, that translates into some kind of horror action figure for my shelf in my office. This year proved to be no exception - and it was something totally unexpected. Yes, my 6 year-old thought it would be a good idea to purchase Zombie Hulk for her dad. She was, naturally, correct. 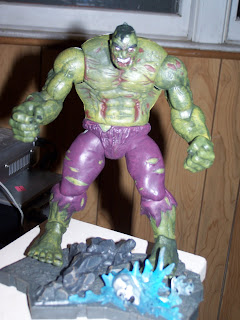 As it turns out, they have Zombie Spiderman and Zombie Captain America down at Mayhem, which I might have to pick up at some point in time as the bases all connect together. I love the addition of the "eaten" Silver Surfer on the base. Nice touch.

Speaking of being eaten, one of the earliest gifts we purchased was a Barbie wheelchair. We got it off of eBay right after we got back from Phoenix in October. While we were there, my brother's dog, Eddie, found one of Anna's Barbie's and partially mauled it - just one foot and part of one arm. We went online to see how much if it could be easily replaced, and wouldn't you know, it's one of the dolls that costs $60 to replace! So instead of doing that, we got a wheelchair for her - Anna loved it. 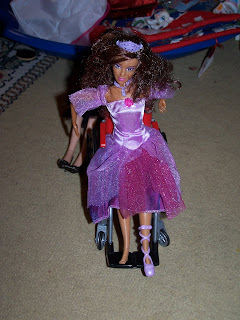 And just because I can, here's a Christmas morning picture of Anna with some of her loot - and Spirit (she renamed the pony.) 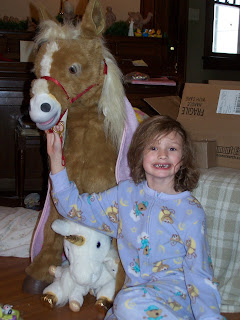 Mostly though, I had a good time being at home with my girls and seeing family and friends. I can't say that I'm terribly looking forward to returning to work tomorrow, but that's mostly just vacation brain talking.
Posted by Dan at 12/25/2007 09:49:00 PM

I adore that you bought Anna's Barbie doll a wheelchair and my mother applauds you.