It's just a feeling

After a winter of nearly constant snowfall and cold temperatures, we've finally managed to thaw out. A solid week of 50 degree weather has pretty much decimated our snow cover and I don't think you'll find anyone that has a problem with that. Spring really feels like it's in the air, and while we're not out of the woods yet as far as the freakish April snowstorm goes, we're all breathing a little bit easier.

I was headed to a late afternoon appointment the other day when spring really hit me. It was a combination of things - the smell in the air, the lack of snow, and the feeling of having been released from prison. Yesterday, as I was leaving work and it was 58 degrees outside, it hit me again. The warmer weather is part of it, but it's more than that. It's a feeling that I can't describe.

Naturally, it made me want to listen to Bella Donna, which is exactly what I have been doing. 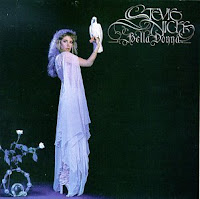 Stevie Nicks is such a "spring" artist to me and of all her albums, nothing says March or April more than Bella Donna. I've told the story of how, in the fall of 1987, I became infatuated with Stevie Nicks. The reason for this was twofold - Fleetwood Mac had released their first album in 5 years that spring, Tango In The Night, and Madonna was headed into a year long dry spell which would end with Like A Prayer in the spring of 1989. As a consequence, Stevie pretty much had my undivided attention. My mom had the Rock A Little record album and I bought both Bella Donna and The Wild Heart in October or November of 1987. I listened to them throughout the winter to the exclusion of so many other things I shudder to think of what I might have missed. I remember coming home from school and going up to my room to soak up the music and ponder the impossibly high heels that Stevie was wearing on the cover of the album. But even with those heels, she probably would still only come up to my chest.

So by the time we got to the spring of 1988, I was a goner and completely obsessed with Stevie's music, particularly Bella Donna. Is there any better album for a shy and introverted teenager with a streak of unnecessary melancholy? Stevie pushed all the right buttons. With her vague lyrics that could be applied to nearly any situation, she seemed like a kindred spirit, like the wiser and older aunt that was so much cooler than your own parents. I must have listened to the song "Think About It" a zillion times that year alone, always entranced by the lyric "Even when you feel like your life is fading/I know that you'll go on forever, you're that good/Heartbreak of the moment is not endless/Fortune is your life's love." It reverberated inside my 15 year-old head like nothing else, when the world seemed to be crashing down (it wasn't) and my teenage angst felt as big as a mountain, even though it really could have been measured in angstroms. 23 years later, it still resonates, for no other reason than it's true. Heartbreak of the moment is not endless. Lather, rinse, repeat.

The thing about Stevie's music is that you're on the ride with her. To truly have the Stevie experience, you have no other choice but to feel what she does. I feel Bella Donna contains her most vivid examples of balls-out honesty (pardon the expression) in a career littered with what from other artists would have amounted to an uncomfortable overshare. You experience her disillusionment with fame on "After The Glitter Fades" and her internal struggle with relationships on "Leather & Lace." The album really is her, something that is only hinted at in her work with Fleetwood Mac.

But it's the title track that I've been coming back to over the last week or so. The opening 5 piano chords are part of the soundtrack of my life. The structure of the song defies conventional description. There's really no bridge and no concrete refrain. But the melody is very strong and it doesn't take 30 bars to complete. Stevie talks about how the song "Bella Donna" is "about getting a little bit of my normal life back." I also liked this interpretation I found online:

I definitely see how this song is kind of a letter to yourself. "Bella donna...my soul..." This song conveys sort of an understanding and compassion with the lowest parts of yourself and presents a sort of crossroads mood; you've taken stock of your situation and now you're ready to take a step towards a direction.

Well, no wonder it hit my teenage self like a ton of bricks. Talk about a time in your life when you're making steps in new directions.

I also find it telling that they should mention writing a letter to yourself, because there are so many times over the years that found myself wishing I could either write to or go talk to the 15 year-old version of me. In years past, I have wanted to go back and slap him silly. But the older I've gotten, the more at peace I've become with that part of me because, like it or not, that adolescent me is still in there. And what I've found is that I have to treat that part of me with a liberal dose of kindness. It's nowhere near as equipped to deal with the world as my current version is, which probably makes me less equipped than I think I am.

Hi Dan...just started reading you again. I love the post. Great memories -- I share some of them.

I don't think I have a season for Stevie, but I completely get what you're saying. Right now, I just need an opportunity to drive down the highway with GaGa's Fame Monster at 11, and I'm there!

I need to do that as well! (re: Fame Monster) We're almost there!