Not what you'd expect from an amusement park 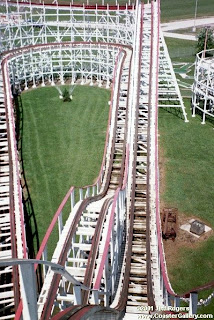 Every year we make the trip to Adventureland, an amusement park located just south of here near Des Moines. We've gone there ever since I was in the 6th grade when I went along with the safety patrol at the end of the school year. Like I have written before, my first encounter with Adventureland was the first time I'd gone to an amusement park that didn't require tickets for rides. You pay the admission, you ride till you're done or you puke your guts out - whichever comes first. I get massively discounted tickets through work so we go pretty much every year. As Anna said to me earlier this summer "Dad, it's kind of a tradition that we go to Adventureland." Yes, Anna, it definitely is.

We were supposed to go yesterday, but we got rained out. Fortunately, I had today off as well, so we simply rescheduled for today. The only hiccup was that tomorrow is the first day of school and Anna likes to stay until the very last possible minute. This was not going to happen today. So we got up early and got there not long after the park opened with the caveat that we were leaving at 5pm sharp. After some initial grousing about not being able to stay as long, she saw the light and agreed to the terms. This was a good thing as it was not a negotiable point.

She brought a buddy with her so she didn't have to hang with us oldsters and in the end, it was an especially smart move. I used to ride those rides like crazy. When I was a kid, there was no ride I wouldn't get in line for, even if I really was a little bit scared. I did take a long time to really warm up to roller coasters. I didn't actually ride the Tornado until the year after I boasted to my friends that I had done it, only to give a completely inaccurate account of the ride (based on the cartoon depiction of the coaster on the Adventureland map.) My deception revealed, I vowed to ride it the next year, which I did. After that, I rode everything and mocked those who didn't as sticks-in-the-mud.

Well, karma's a bitch because now it's me that's the stick-in-the-mud. Each year, I ride less and less. This year, I rode exactly four rides - the Giant Sky Wheel (100 foot tall Ferris Wheel), the Tornado, the Space Shot and the chair lift across the park. You can forget anything that goes rapidly around in a circle. My innards just can't take it. The Silly Silo (aka The Human Centrifuge) was the first to go. Now, even something as innocuous as the Tea Cups (modeled after the Mad Tea Party in Disneyland) leaves me feeling nauseous. As I have said before, I will not continue to ride that stuff just to say I can do it. I am over that shit. And Heidi, with all her aches and pains that randomly come and go didn't so much as set foot on anything save the chair lift.

So this year, Adventureland felt more like a sentence than something we were looking forward to. But Anna does love it so and as I have said, being a parent really teaches you the true meaning of the word "sacrifice" so we muddled through. We turned the girls relatively loose and sat on benches, talked a lot, ate crappy amusement park food, listened to late 90s music coming from a speaker near the Falling Star and really, despite our expectations, enjoyed the hell out of it. We enjoyed being together so much today. After a summer that has really felt like the Lost Summer, with me working a fantastic number of evenings and during which we never really established a good routine, it was nice to reconnect, even if it was over our lack of desire to spend one of the last free days of the summer at an amusement park we've been to so many times I need scientific notation to express it succinctly.

Heidi said to me today "you know, I feel like I should feel bad about not wanting to ride and not really liking this anymore, but honestly, I don't." I know what she was saying. We used to make trips to Chicago to go to Six Flags Great America and even up to my late 20s, I was still loving rides and all that. We kind of decided that we were glad we enjoyed it then. It's just like anything else, you grow up. Even this perennial boy-in-a-man's-body has realized that that part of me really isn't there any longer. It only exists in memory. I can still fake it a little bit, but each year it gets a little bit harder. My long-running joke is that I am 3 years away from having to sit in the car while everyone else goes in. The fact that I've been making that joke for 10 years should tell you that it's deliberately melodramatic. However, there is a kernel of truth in it.

I always remember my grandparents taking the entire extended family to Adventureland through my teenage years. They, of course, never rode the rides - at least not that I can recall. They were well into their 70s by then so it's no surprise that they didn't. Still, they went religiously, year after year just to be with family. Those are some of my most treasured memories of my grandparents, even though one year my grandfather did inadvertently belch in my face - something that was mentioned several times at his funeral a couple years back and still comes up in conversation to this day.

So here's to family and relationships and all that. Who knew that an amusement park had such a binding effect? We're not grandparents yet, but Lord knows I have enough gray hair to pass as one! 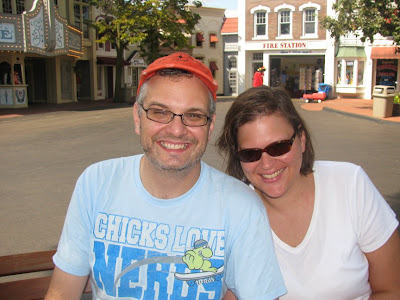 (I actually had to buy that hat today as I couldn't find my sunglasses and needed something to keep the sun out of my eyes. It's the first piece of distressed clothing that I've ever purchased unless you count stonewashed jeans in the 80s.)
Posted by Dan at 8/18/2010 08:58:00 PM

I know what you mean, Dan...I used to LOVE amusement parks and all the rides, but now I can't imagine it would be anything but annoying to me! I haven't been to one in nearly twenty years now. And I even used to have a season's pass to King's Island in Cincinnati, Ohio, every summer throughout high school! Maybe I'd still enjoy it today, but I doubt it. Like you said, it's just something that you appreciate more when you're younger, and then you lack the patience and stamina for it as you get older. But I'm really glad that you and Heidi (and Anna and her friend) had a wonderful time despite all of that stuff!

The part about your grandfather accidentally belching in your face made me laugh my butt off. And that's such a great photo of you and Heidi. Remember, gray hair looks DISTINGUISHED! :)

I guess I shouldn't have been so disappointed when my parents took me to Adventureland when they were in their 50's and wouldn't ride any rides. My mom rode the Galleon, I think it was called, and then she was done. They really regretted not having me bring a friend. I have never really ridden a super-big roller coaster, and I'm afraid I'm too old to start now.

Jason - I think the hardest part of yesterday was the fact that I am not as young as I used to be. In my younger days, I would be there the minute the park opened and stay till the very end. No more. When it got to be 4:30, we were both saying "only half an hour more--YES!"

Mary - I would still ride the roller coasters with you if you ever want to join us!

I'd like to try riding the roller coasters, but I'm also afraid I'd pee my pants. I feel like it's something I should do before I die, though.