There be water here

Yes, I know. The blog has been silent. We've had out-of-town company and have been gone a lot so it's been hard to find time to sit down and do nothing, let alone compose a half-way intelligent blog post (and half-way intelligent is sometimes all I aspire for.) I was all set to do something tonight, but then Ames got smacked by the Flood of 2010. This is an aerial shot of the football stadium and Hilton Coliseum, home of the Iowa State Cyclone basketball team. 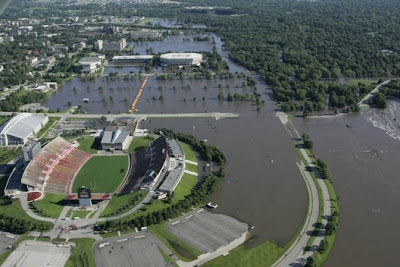 We live in the upper right hand corner of this picture, but fortunately, we're dry and doing well.

It flooded in 2008, but nothing like this. It flooded in 1993, which was called the "hundred year flood" but the Skunk River and Squaw Creek are cresting higher than 1993 levels. As my friend Jess said, "this is some 17-year flood we've got going on." And to add insult to injury, a water main broke which caused the city to shut off the water treatment plant. So as of right now, we have no water to drink or shower in or even to flush our toilets. Fabulous.

This came about because of three nights of TORRENTIAL rainfall on an already saturated ground. Restaurants are closed, there was only one very convoluted way in and out of Ames today and there's more rain in the forecast for Friday. As Kylie Minogue would say...no more rain!