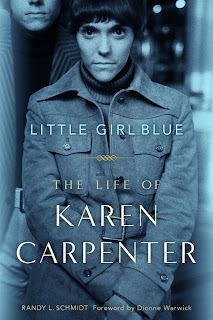 The minute I heard about it, I knew that I would like Little Girl Blue: The Life of Karen Carpenter. What I didn't expect was to tear through it in less than a week nor did I expect it to keep me up well past my bedtime several nights last week. My exposure to the Carpenters is about like you'd expect - I know of them, their biggest hits and of Karen Carpenter's battle with anorexia nervosa. I own none of their studio albums and would not classify myself as a Carpenters "fan" by any stretch of the imagination. What I will say though is that reading this book has caused me to listen to more Carpenters music than I have in forever and the book itself is the best book I've read all year.

Little Girl Blue is written as a music biography, but it reads like the best pager-turner of a novel that you can imagine. It follows the path that most music bios do, starting with the childhood of musical genius Richard Carpenter and his kid sister Karen. Long before Karen was the voice of the Carpenters, she was also a drummer, playing in the high school marching band. In order to maximize the chances of Richard's career taking off, Harold and Agnes Carpenter moved their family to southern California when Karen was in ninth grade. One connection led to another and then another and before you know it, Karen and Richard are signed to Herb Alpert's A&M records. The hit singles followed. We all know them. "Close To You," "We've Only Just Begun," "Superstar," "Rainy Days & Mondays," and "Top of the World." They toured relentlessly and were hugely popular even though their music and image seemed white bread and out of step with the acid rock music of the same time period.

Author Randy Schmidt does an exceptional job of respecting the memory of Karen Carpenter and recognizing her amazing talent, but he also pulls no punches when it comes to her struggles. Perhaps because there was no cooperation from the Carpenter family, which has famously whitewashed everything surrounding Karen's death in an attempt to keep the Carpenters' legacy intact, I feel like this book comes the closest to giving us the real story of Karen Carpenter. Whether it was dealing with a mother that always loved Richard more and gave Karen precious little validation or getting married to a man that ended up living up to all her worst expectations, it seems to me that all Karen ever wanted was to be loved. This all came to a head when Agnes Carpenter forced her daughter to go through with a wedding to a man when the marriage was already over because "People Magazine will be there!"

Another example came after she recorded a solo album with Phil Ramone in New York while Richard was hospitalized for quaalude addiction. After taking the better part of a year to make the album, it was trashed by A&M executives when the album was played for them. But Richard's reaction was probably the worst. This quote from the book sticks with me:

"He told her it was shit," Frenda [Karen's best friend] says. "All Karen ever wanted was his approval. It could have turned everything in her life around, but it wasn't there. What's sad is that he has to live with that, and I don't think it even fazes him. I do think he should be excused to some extent because he had his own problems, but God Almighty, what does it take to just be kind? They could see she was melting away like a snowman in front of their faces, but they couldn't do it. It was brutal."

The album was shelved, but eventually released in 1996 in its original form.

Behind all this relationship drama was Karen's very real battle with anorexia nervosa, complications of which would ultimately claim her life in February of 1983. She was so dishonest with everyone when it came to her anorexia. When asked point blank about it, she was incredulous and in denial. This interview was referenced in the book, and I am still kind of shocked by the forwardness of the interviewer's question.

Karen would bottom out at 78 pounds just before seeking treatment. Trouble is, our knowledge of how to treat anorexia was in its infancy in the early 80s and much of what was done then was not much of a treatment at all. Move this story forward a decade and I think Karen might have survived. Her death brought anoxeria out of the closet and worked wonders for raising awareness of the disorder. In that respect, I feel like her early death had at least some meaning and was not completely senseless. 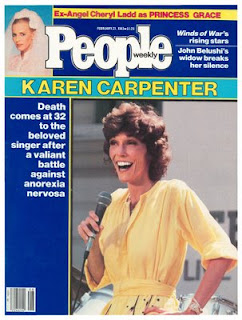 I was extremely moved by Karen's story - I've been telling Heidi anecdotes from the book all week long. Like I said, I have none of the Carpenters' studio albums but I do have the greatest hits album Singles: 1969-1973. My parents had that 8-track when I was a kid and I purchased it on CD my freshman year of college, thus destroying what little musical credibility I had with other 18 year-old males at that time in my life. Needless to say, it's gotten quite a bit of play this week. I've also broken down and purchased a few songs off of Karen's solo album and will undoubtedly purchase the rest of it once my eMusic account recharges sometime next week. It's better than you think, if rather dated early-80s music is your cup of tea.

But for most people, it will be the music that she made with her brother during the 70s that they will remember. For my money, my favorite is still "Top of the World." I do love a little 70s country-pop, and that song fits the bill quite nicely.

Little Girl Blue is highly recommended and I guarantee you will want to listen to Carpenters music after you read it.
Posted by Dan at 3/06/2011 09:32:00 PM

Is this more riveting than Nellie Oleson? Because I loved her book too. I see that the Waukee Public library has this book, so I will have to check it out. As a kid, I saw a TV movie about Karen Carpenter's story. My family watched it together, and it was amazing.

Nice Review Dan. I think this will be the first book I have bought in maybe 10 years. I remember watching the TV movie and being very disappointed because it didn't really give us any understanding of why it happened. It was very matter of fact. Not a whole lot of insight into anything.
Anyone who has limited themselves to the singles and liked them should try out the albums. There are very few clunkers. Yes they all sound very dated, but when your in a mood for calm, serene and beautiful it doesn't get any better.

This is a fascinating book that shows the depth of Karen's pain. She was never allowed to grow up and leave the family nest, and the few times that she tried to do it turned out to be disastrous.

This book seems fair to me - It's not just a hatchet job on Richard, and it also shows some of Karen's not-so-wonderful side.

I couldn't recommend it more highly.

Mary - it's certainly not funny like Confessions of a Prairie Bitch and 100% less mentions of Michael Landon not wearing underwear, but it's engaging and while sad, is an amazing look at Karen Carpenter. I think it helps to flesh out who she really was.

Dwayne - According to this book, the TV movie was very sanitized by the Carpenter family. I got this book from the library, but I really want to buy it to show my support for the author and because it was just that good.

Diane - Thanks for commenting. I agree wholeheartedly with your assessment that Karen was never allowed to grow up. I also respected the restraint the author showed and you're right - it wasn't just a hatchet job on Richard or the family. It held Karen accountable as well.