People who know me well know that I love my iTunes playlists. I have been making a more concerted effort to listen to more full albums these days - and let me tell you how I will NOT be blogging that endeavor as I certainly can't blog an album a day - but I still love grouping seemingly unrelated songs into a playlist that results in a cohesive whole, if only in my own head. One of my very favorite playlists is one crafted from the music I listened to during my first year at U of Iowa, creatively titled "U of I 1992-1993." You'll have to click it to make it readable, and I had to put two screen captures together to get all the songs on there, but damn it, I did it! 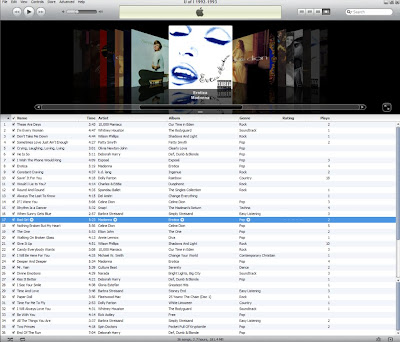 I think what I love most about this playlist is its variety. I have similar playlists from each year of high school, but when I was compiling those, I only allowed songs that were released during that time to make the cut. When I got to my college playlists, I was a little more liberal because my sophomore year of high school playlist has not one little bit of Stevie Nicks on it. That's a pretty glaring omission and because of that, I decided that allowing songs of any time period on to the list - just as long as I was actively listening to them at that time - was allowable.

I'm not going to comment on every song, although I will pick out a few, but allow me to make a few comments about the list as whole and the time period it represents. As I have mentioned before, that year was my third year of college, but my first at U of Iowa and my first year of pharmacy school. I had uprooted my life and moved it across the state - not that I was leaving terrible much because I was ready for a change after two years at Iowa State. Most of the music that I remember listening to was listened to in relative solitude, not that that was a bad thing. In hindsight, it was pretty important that I have that year in a single room on a floor full of guys, 99% of whom I shared not one single thing in common (although admittedly, my effort left something to be desired.) Eventually, I would make good friends in my pharmacy classes and would move out of the dorms for good at the end of the year. I specifically remember the spring of the year feeling like real living - friends and experiences and, well, life. The songs on this playlist provided a worthy soundtrack to that time period.

And now for some specifics...
When I look at this list, I think that had anyone listened to what was coming out of my headphones at the time they would have probably had me committed. Maybe I needed to be. That's what I love about music. I can still see the nearly 40 year-old guy in the stuff the 20 year-old was listening to. The minute that stops, I need to throw in the towel.

Is it the most manly stuff in the world? Hell no. Do I care? Double hell no. Do I sometimes get teased for it. Yeah, sure. But it's all in good fun and if you can't laugh at yourself, you might as well just forget it. I didn't know that then, but I sure do now.

Popular ringtone in 2018
Hi everybody
Today I will share with everyone is music. Music is fun. Fun music. Music brings me sanity. I'm going on the music road. That is Ringtone. Free ringtones for people around the world. These are vibrant tunes that you can reference and install:

You can leave a review for me, it helps me improve the ringtone more to do a new look for the world of ringtones. Visit my homepage to find more ringtones: https://ringtonedownload.in/

Hi there every one, here every one is sharing these know-how, so it's fastidious to read this website, and I used to visit this web site everyday. if you want to know idol's account on instagram, please check link webstagram