Ramona and Beezus and Dan and Anna 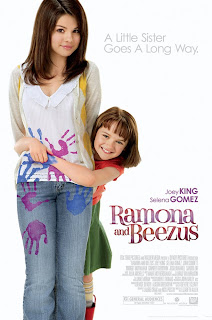 As a kid, I enjoyed but didn't love Beverly Cleary's Ramona books. I think had I been a girl, I might have related more to young Ramona who was either a pest, brave or age 8, depending on the book. A few years ago, Heidi and I read all of them out loud to Anna at before bed, a chapter or two at a time and she loved them and, honestly, so did I. There was so much I had forgotten. They are clever and well-written and they deserve their status as modern day classic childrens' books. Most hilarious is how each book is contemporary, even though Ramona ages a year at a time through the series. Ramona may be four in 1955, but it's 1999 when she's in 4th grade.

So it was with great anticipation that Anna and I finally sat down and watched the movie Ramona & Beezus. We had planned to see it at the dollar theater but it must have been there for two and a half minutes (as is common for movies at the dollar theater) because I never saw it show up there. Heidi was working on her rejuvenated iMac (thanks to yours truly) so we decided tonight was the night. There might have been tornadoes and other severe weather in the forecast, bu watch it we did.

I expected to be amused by it. I did not expect to be completely won over by it.

The movie smartly draws plot points from all the Ramona books. All the classic Ramona moments are in there - the toothpaste in the sink, the burr crown, the demise of Picky-Picky the cat, Ramona's dad losing his job, the raw egg vs. the hard-boiled one - and they are all blended effortlessly together in a contemporary telling of the story. The cast is attractive and while it veered occasionally into mushy, I didn't much care because everyone was just so darn cute. A part of me hopes that Joey King (the actress that plays Ramona) fades into obscurity so as not to suffer a Lindsay Lohanesque fate.

I think the fact that I watched this with my own daughter played a huge role in my fondness for the movie. Ramona's dad is played by John Corbett who was vaguely familiar to me until I realized that he was Aiden in Sex & The City - yes, I had to look it up. I am a huge sentimental sucker for stories about dads and their daughters and while it wasn't entirely about that, all the dad-daughter moments hit me squarely in that spot underneath my breastbone. Watching it and anticipating all the previously mentioned classic Ramona moments with Anna, who frequently remembered what was going to happen from the books before I did, was just perfect.

I always kind of semi-joke that sometimes I feel like an absent father - between work and other things, I sometimes feel like I am not home as much as I should be and that I'm missing out on my own daughter's growing up. This would be the point at which Heidi looks at me sternly over her glasses and says "you are NOT an absent father." Watching this movie made me want to get out the longest stretch of blank newsprint ever and fill it up with color, just like Ramona and her dad did in the movie. Towards the end of the movie at the wedding dance between Ramona's Aunt Bea and Howie's uncle Hobart, Ramona's dad gives her a goofy look and does a funny dance as he walks toward her saying it was "time for the father-daughter dance." Upon seeing that, Anna looks at me and says "that's just like you do to me."

With that, I knew I was doing something right.

I am unapologetically sentimental when it comes to my daughter - give me a break, she's the only one I have. It will so be worth the trouble tomorrow morning getting her out of bed because I let her stay up a half hour past her bedtime to finish the movie.

Totally recommended. It even caused me to have a passing fondness for that hideously awful Bangles song "Eternal Flame."

I'm over that now. But I would totally watch that movie again.