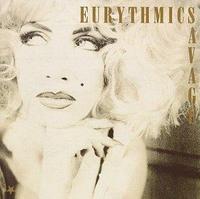 It's been a long time since I've done my CD spotlight--I think the last one must have been several months ago. Anyway, I was looking through my CDs the other day and there was Savage by Eurythmics staring back at me. I couldn't remember the last time that I'd listened to it, but it's one of those CDs that even though it doesn't get listened to very often I could never dream of parting with it.

I can still remember seeing the first video released from this album--the tres bizarre "Beethoven (I Love To Listen To)" which featured Annie Lennox dressed up as a dowdy housewife and her alter ego sexpot. I sure didn't know what to make of it because it was a radical departure from stuff like "Missionary Man" and "Thorn In My Side" (released just a year or so prior.) I mocked it publicly, but privately, I was intrigued. It's one of those songs that really didn't have a prayer of making it at radio--even then, when radio was a little bit more forgiving than it is now. As quickly as "Beethoven" appeared, it disappeared from MTV and they started playing "I Need A Man" which had Annie dressed up as the same sexpot as "Beethoven" did.

By then, I'd determined that I was going to buy the album (which I bought on cassette tape one Sunday afternoon in January of 1988.) And I immediately loved the album. The whole album is a little bit more experimental than what Eurythmics had been doing--they kind of abandoned the whole straight-forward rock thing that they'd done for a couple albums. I think it was with Savage that I truly began to appreciate Annie Lennox's talent. I'd had the album Revenge and was never all that impressed with it--mostly because not much else on it sounded anything like the singles--but without the burden of hit singles, Savage appealed to me on a level that I hadn't expected. Songs like "You Have Placed A Chill In My Heart," "Shame," and "I've Got A Lover (Back In Japan)" were just the thing that my introverted 15-year-old self needed. Plus my friend Kelly liked Savage as well, so that just made it even cooler.

Funny thing, it's the only Eurythmics CD (apart from Greatest Hits) that I still have. I've purchased others and subsequently sold them. It's the one Eurythmics album that still speaks to me in pretty much the same language it did back in 1988.
Posted by Dan at 7/24/2005 11:06:00 PM

Viva Savage! This came out when I was a freshman in college and we loved it. That was in the days when we actually played the cassettes and learned all the songs.

I LOVE "Beethoven" - esp the spoken stuff which I fear I will do aloud at the gym as I bounce on the eliptical ("I'd love to know, wouldn't you!?").

"Shame" is one of my top 5 Eurythmics tracks, but as I have aged another song that sticks for me is "I've Got A lover" b/c it's just so crisp and the spoken bits are brilliant. Perfect POP.

They did a full length video for this album which I hope will see the light of day. It's lovely and ends with a sweet video for "Brand New Day" that you might like. I wonder if it is on youtube?

You DO need to re-investigate their catalog though...I even splurged on the box set last year. Some friends had to go without presents thanks to my needy greed.

More fave album posts when you have the time!