Everything here is edible... 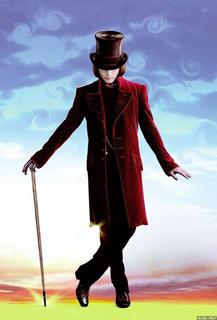 Wendy and I went to Charlie & The Chocolate Factory last night. I've been a little bit nervous about the movie ever since I saw the teaser trailer a few months back. Honestly, I wasn't sure that Johnny Depp could pull off Wonka, and after seeing the trailer, it looked like my instincts were right. It seemed like Johnny was just being a little bit too weird this time around. Well, I can say that even though my instincts seemed right, they couldn't have been more wrong.

This movie was one heck of a lot of fun to watch. As a kid, I loved the Gene Wilder version, but I think this one is even better. It's tighter, better paced and completely lacking in the ridiculous songs that do nothing but slow down the story ("Cheer Up, Charlie" springs immediately to mind.) And Johnny Depp is the perfect Willy Wonka. Now I can see why Gene Wilder was being so bitchy about the remake--this movie is simply better than his, and truer to the source material to boot.

It's been years since I've read the book--probably grade school--but I remembered enough about it to know that it was a lot darker than the 1971 version of the film (which Roald Dahl apparently hated.) I had completely forgotten about how Vercua Salt was a bad nut--and not a bad egg like the 1971 film portrayed. And it's easy to see why they went with geese laying golden eggs instead of a room full of squirrels sitting on stools testing and shelling nuts. The technology simply didn't exist then to do that convincingly. But I was glad that the squirrels were back--it was a great scene, just a little bit scary, but not so scary that kids will have nightmares.

That's kind of my take on the whole movie--darker (but not too scary) and better. I'd expect nothing less than dark from Tim Burton, though. However, the best part of thew hole movie is how they put my favorite scene from the book into the movie--notably absent in the Gene Wilder movie. And that's the scene where the other kids are leaving the factory, restored (for the most part) to their original selves. I remember reading that scene in the book wishing I could see what happened to the other kids and now, well, you can.

Heidi will probably want to see it, and Anna would probably like it too, although I'm tempted to not let her see it until she's old enough to have heard the story. But who knows. A good summer film that lived up to its potential, in spite of my reservations.
Posted by Dan at 7/18/2005 11:39:00 AM