Take a car out to Heathrow

I was talking with a friend this morning about how we're kind of done with the whole Hard Candy project. Really, the only thing I am waiting for right now is the DVD of the Sticky & Sweet Tour (which is set to be filmed at the upcoming Buenos Aires shows.) My disappointment with the album as a whole was diminished by the tour, but I still feel like it is a half-assed effort that she could not even bother to promote. I am hoping that she disappears for a while to get her act back together and come back with something brilliant. As it is right now, she is descending into what appears to be a mid-life crisis with the whole A-Rod and plastic surgery thing. Come on, Madonna. Act your age!

I know that she is capable of brilliance, but it looks like we'll be waiting a while for that to reappear. 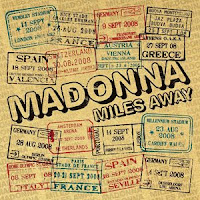 In the meantime, I am absolutely in love with A Crowd Electric's remix/mash-up of "Miles Away." From what I have gathered, they were so disappointed with the remixes that were officially commissioned that they did their own which I think is better than all the official ones put together (and most of the Hard Candy remixes in general.) Rather than turn it into a dance floor anthem or something that it is not, they were much more subtle about it. It almost plays like a mid-to-late 90s production with the spoken word interludes and smooth and cool beat which is not all that different from the original. Honestly, this is my favorite Madonna remix since the extended remix of "Jump" in 2006. I used to be all over remixes, especially Madonna remixes, but since they became a dime a dozen on the internet, give me the album version any day of the week over some shitty fan remix or 12 minute monster that barely uses her vocals.

You used to be able to download the remix from A Crowd Electric's web site, but apparently Warner had a coniption fit so it has been taken down. You can't even stream it on their MySpace page. Luckily, I grabbed it before it got taken down.

Meanwhile, here's Madonna meeting people in Argentina (photo via Madonnalicious.) She looks good, but those cheeks are just too much. 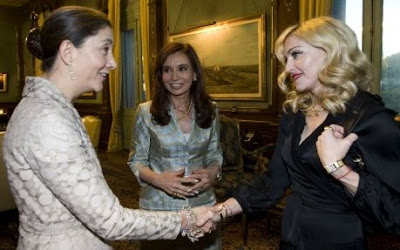 Anonymous said...
This comment has been removed by a blog administrator.
9:43 PM

Sorry anon, I am not going to risk the blog being taken down for links. People can search for them, it's out there. That's why I deleted the above comment.

Oh! I just saw this - great minds think alike (see my blog). I wrote my post this morning but wanted the Madge/Britney one to be on top.

I'm kind of rethinking my opinion that she looks good in that picture. Her face is at complete odds with her arm sticking out from under the coat! I guess there will be no growing old gracefully for Madonna, at least in the physical sense.