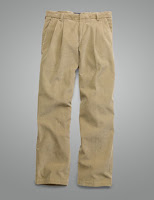 So tonight we went out to North Grand Mall to hit JCPenney because I was really in need of a new pair of jeans. My "good pair" of jeans is fraying at the cuffs and my "bad pair" has holes in the butt, so yes, it's time to splurge and get a new pair.

But in addition to this, I found not one but TWO pairs of cords for work on the clearance rack. Dockers, no less, marked down from $60 to an unbelievable $6.97. That is nearly a 90% price reduction. The only way they could have been better is if they had been flat front instead of pleated front, but at 7 bucks a pop, I was not about to be picky.
At prices like that, they could have been splattered with blood and I probably still would have at least seriously considered it.

One odd thing that did happen tonight. When I was in the changing room trying the pants on, I caught a glimpse of myself in the mirror and damn but I have gone gray over the last few years. Not that I mind, of course. For someone who got his first gray hairs before he was out of his teens, it doesn't really bother me all that much. But still, time marches on. If I have any brown hair left by the time I am 40, I will be shocked.
Posted by Dan at 2/23/2009 08:35:00 PM

ooo i love a good bargain. you still owe me a shopping date by the way :P