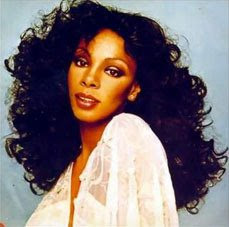 As a result of the residual effects of the daddy-daughter dance, I bought Donna Summer's "Last Dance" on iTunes last night. Now don't misunderstand me, it's not as if I didn't already have that song in my iTunes. But the version I had was the one from Endless Summer, the umpteenth collection of Donna Summer's work from the 70s through the early 90s. It contains a horrendously edited version of "Last Dance", whittling it down to a meager 3:22. When I was listening to it after thinking about it the other night, it just seemed so, well...short.

So the version I bought was the 12" version, which clocks in at a 8:11. I lingered over the 4:58 edit from On The Radio, but I thought that since they were both 99 cents, I was getting nearly twice as much "Last Dance" for the same amount of money going for the 12" version.

I have not been disappointed. Upon listening to it, I realized that the edit completely excised what is basically the bridge. It was as if it were lying dormant in my brain, because the instant I heard it, I realized just how crucial it is.

The 12" version also works in 3 different key changes and at about the midpoint goes back to the slow opening. Now THAT is how the song is supposed to sound.

Really, if you get right down to it, the edits that go on most best-of collections are pretty bad. I realize that best-ofs are catering to a completely different type of music fan than studio albums are, but they just always sound so bad to me. GHV2 remains the only Madonna album I have not purchased, mostly because it is the single laziest Madonna release ever (no new songs) but the edits on there are particularly heinous. I can make my own version of GHV2 very well, thankyouverymuch. And it will be better than the one officially released by the label.

Those big mammoth disco epics of the 70s were meant to be experienced in their original form, not in a bite sized piece. And you just won't find those on the best-of sets.
Posted by Dan at 5/03/2009 05:04:00 PM

All I can say to that last paragraph is "Amen to that!"

I don't know if you saw my Last Dance vs On The Radio informal poll last month on Facebook. Last Dance won!

That might have been the poll that just made me think of "This Time I Know It's For Real." As you said, a totally different era!

Thst's a fantastic bridge! Your post made me go back to see if I had the 12" versions, and luckily I do! I had to dust those puppies off and give them a spin.