Icicles in hell, Kylie in the U.S. 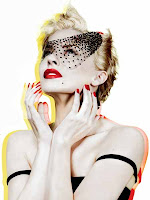 I am going to join just about every blogger I know in celebrating the announcement of Kylie Minogue's North American tour! (best headline ever in that link.) Well, if you can call a 6-date run a "tour." Anyway, we can hardly bitch because Kylie has never once during her entire 21 year career seen fit to tour in the U.S. And really, I can't blame her all that much. The U.S. has been very lukewarm to Kylie, "The Locomotion" and "Can't Get You Out Of My Head" notwithstanding.

Thankfully, one of the cities on the tour is Chicago. While not next door, it is still a relatively uncomplicated trip (see the Sticky & Sweet Tour.) I e-mailed Heidi with the news and she was instantly on board, also trying to talk our friends Jeff and Caryle into going as well. The show is October 7th, and tickets are "only" $75, which is still fully half of what I spent on my Sticky & Sweet ticket and about what I spent for Dolly Parton. If Heidi, Anna, and I all go, it will be a pricey night, but one that we will not soon forget.

But here's the thing...the venue, the Congress Theater, seats a mere 4000 people. Now, I know that Kylie does not have the draw of say Madonna or U2 or Coldplay, but 4000 seats? One show? I think they are SERIOUSLY underestimating Kylie's ability to sell tickets. There are probably 4000 people within the Chicago city limits that would be interested in those seats, leaving everyone else out of luck. Kylie's appeal within the gay community is tremendous and just because she has not had album sales in the U.S. to match her contemporaries, don't think for a minute that those seats will not sell out instantly. I would like to think they will add more dates, but there really isn't any time built into the tour schedule for that. My worry is that the seats will sell out during the weeklong presale for fan club members and American Express cardholders. Anyone out there have AmEx and willing to give me their number? I promise to pay you back!

I am going to try to go - who knows, it might be another 21 years before she heads back to the States. I want to at least give it a good, honest effort to make it to see her live for she is another of those artists on my short list of people to see live. I just never thought it would happen in the U.S.

Kylie puts on a hell of a show. Yes, she is kind of Madonna-lite, much to the dismay of some bloggers, but I daresay her KylieX2008 tour was at least as entertaining as Sticky & Sweet, and maybe just a little bit more because of Kylie's stubborn refusal to disavow her old songs, unlike Madonna who can't run away from some of her most crowd pleasing hits fast enough.

And as proof of this point, here's the closing number of KylieX2008 - her very first hit "I Should Be So Lucky."

I am always amazed at how little she is.

Oh do attend the Kylie show.

I've been to both Madonna/Kylie recent efforts. I reviewed it here:

The Madonna show was brassy. Full of attitude. Rarely a moment where she acknowledged her audience. She partied. But she seemed to be Miles away. The party was in her head. There was no real feeling. Other than anger. Yes, the Madonna concert was full of anger.

The Kylie show on the other hand was completely different. Kylie is a different performer altogether. She parties but seems to be enjoying it. She isn't as stiff as Madonna. Nor does she rely on amazing special effects to wow the audience. Its more of an intimate occasion.

Like Annie Lennox and Monica Naranjo, who like Minogue, boast a fierce European following I'd jump at the chance of seeing Kylie. She owns the stage. But not in the same way as Madonna commands her attention.

Kylie shows are about having fun, a sense of humour/irony and noting the very finite artistic references. Indeed the latter point is very real. She doesn't simply sing Copacabana for its kitsch appeal...

As for the limited dates...that is very likely to change. They are probably testing the waters.

They probably don't want a repeat of Anastacias American tours.

kylie is freaking amazing live, and i personally would put her slightly ahead of madonna, but then i do in real life anyway. I really hope you get tickets. I shall start a charity collection for you to purchase from ebay if not :)