Today was one of those days where I needed to have a label on me that said "Caution: Not for human consumption." It really has been one of those days. Efforts to shake the funk off were mostly in vain, although I will say that the Pat Benatar book Between a Heart and a Rock Place has been pretty good tonic. Not being a huge Pat Benatar fan, it's filled with little tidbits that I didn't know and the writing, while not great, is highly readable. Not surprisingly, it's also made me want to listen to her music.

Heidi made beef stew for supper tonight and it was especially good. After supper, I still had serious munchies so I went looking for something else. I settled on one of my favorite after school snacks - chocolate milk and graham crackers. Boring? Yes, but beyond good. What you do is fill the glass up about 3/4ths full of chocolate milk and dunk the graham crackers. It's always a bit of a gamble because your timing has to be just right. You don't want to the dunk to be too long lest the cracker break off and fall into the milk, necessitating rescue with a spoon. 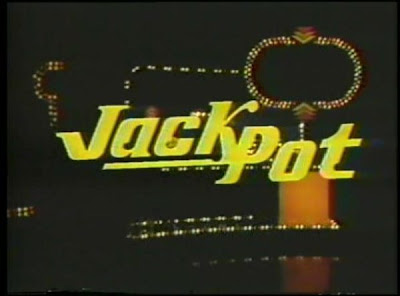 When I was in junior high, I would come home from school and sit at the kitchen table in front of the black & white TV set with chocolate milk and graham crackers. I would watch half-hour after half-hour of game shows. I kind of miss the 80s game shows but everything changes. The one I most associate with this time of my life was on the USA Network - Channel 7 back in the day. The show was "Jackpot" and it featured 16 contestants, 15 of which were seated and had envelopes containing riddles that were worth varying amounts of money. One of the contestants stood at a podium and selected numbers 1-15 and tried to answer the riddles. One of the envelopes contained the "jackpot riddle" and if answered correctly, the jackpot was split evenly between the two contestants. Much like contestant's row on "The Price Is Right," everyone had a chance to get up to the podium, but many didn't.

As I ate the graham crackers and milk tonight, I got to wondering if "Jackpot" was on YouTube. I shouldn't have even had to ask because of course it is.

As it turns out, the one I watched was a syndicated (and Canadian) version of the game show, the original being from the mid 70s. My father always hated game shows - they were in his list of shows he wouldn't watch ("I don't watch game shows, doctor shows, lawyer shows, police shows, soap operas or situation comedies!"), leaving pretty much "Nova" and "Market to Market" for him to watch. I remember old game shows fondly and the new crop from today just don't have the same feel.

In all my years of eating graham crackers I never thought of dunking them in anything. It sounds yummy.

Whatever you do, don't use hot chocolate. BAD IDEA.

One of my favorite snacks was graham crackers and leftover frosting. After my mom frosted cakes, there always seemed to be leftovers that we didn't know what to do with.